Newt Gingrich, Republican Speaker of the House of Representatives from 1995 to 1999, will speak at Ripon College on Wednesday, March 11.

The appearance will begin at 4:30 p.m. in Great Hall and is hosted by the Center for Politics and the People.

A question-and-answer session will follow the talk. Although this is a free event, there is high interest and those want to attend should arrive early to obtain seating.

Gingrich is the architect of the Contract with America that led the Republican Party to victory in 1994 by capturing the majority in the U.S. House of Representatives for the first time in 40 years, according to a press release from Ripon College.

Gingrich is a contributor to CNN. From May 2011 to May 2012, he was a candidate for the Republican nomination for president of the United States, winning the South Carolina and the Georgia primaries. 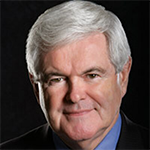