Charlie Scheips ’81, a curator, art adviser, artist, writer and cultural historian based in New York, New York, will speak at Ripon College Wednesday, April 29. His talk will begin at 7 p.m. in Room 147 of C.J. Rodman Center for the Arts. There is no admission charge.

His visit is sponsored by the College’s Department of Art and the Office of Constituent Engagement and Career Services.

Scheips recently published Elsie de Wolfe’s Paris: Frivolity Before the Storm, a major illustrated book about the “international smart set” of Paris in the years just before World War II.

Scheips is a native of New York City. In 2004, he created The Art Set column for newyorksocialdiary.com. The column appears on Fridays on the popular website. He has contributed articles to major publications including Harper’s Bazaar, Vogue, Vanity Fair and other major publications in the United States and Europe.

From 2010-2012, Scheips curated the ground-breaking “David Hockney: Fleur Fraiches Drawings” on the iPhone and iPad that premiered to worldwide acclaim at the Fondation Pierre Bergé/Yves Saint Laurent in Paris and traveled to the Louisiana Museum of Modern Art in Denmark and the Royal Ontario Museum in Toronto. Scheips served as the world-renowned artist’s chief assistant in the 1980s.

In October 2013, several portraits of Scheips by Hockney were featured in a major survey exhibition of the artist — including “Self-Portrait with Charlie” (2005) from London’s National Portrait Gallery — at the de Young Museum of Fine Art in San Francisco.

Scheips was the founding director of the Condé Nast Archive in New York where he served for a decade. He also served for two years as the Worldwide Director of Photographs for Phillips de Pury auction house and directed public relations for Chicago’s Museum of Contemporary Art.

In the late 1980s, he organized the Los Angeles and London International Contemporary Art fairs. He was picture editor and consultant to the blockbuster exhibition “Jacqueline Kennedy: The White House Years” for the Metropolitan Museum (2001-2004) which traveled to Boston, Washington, D.C., and Paris.

His other major books include American Fashion, a 340-page illustrated book of eight decades of fashion in America, commissioned by the Council of Fashion Designers of America; and Andy Warhol: The Day the Factory Died. 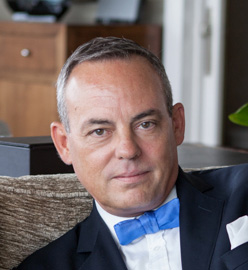