Professor of Religion Brian Smith and three students presented research at the annual meeting of the Midwest American Academy of Religion, April 11 and 12 at Ohio Northern University in Ada, Ohio.

Smith presented his paper “Storytelling in and across Religions” on the panel “Literature and Sacred Texts in the Study of Religion II: Narrativity in the Study and Practice of Religion.” He also chaired two different panels.

Smith’s expertise is analyzing the Bible and its historical context. His new paper discusses various myths, how they travel and are interpreted. “I was venturing beyond my comfort zone,” Smith says. “I was new to that area.”

Zachary Muench ’16 of Franklin, Wisconsin, presented his paper “Medical Ethics: The Integration of Theory and Practice in Contemporary Medical Education” on the panel “Ecology and Science in the Study of Religion II: Clearing the Air, Four Perspectives on the Science-Religion Interface.”

Because the students were presenting to a large group of undergraduates, graduates and professors. Muench says, “I was worried I wouldn’t be taken seriously, but the professors and graduate students at the conference were extremely supportive.”

Courtney Bloomer ’16 of Beaver Dam, Wisconsin, presented her essay “Syncretism in China” for the panel “Religions in Asia II.” She says the experience “was very empowering. Everyone was so encouraging and excited about what I had to say.”

Alexander Baldschun ’15 of Green Bay, Wisconsin, presented his paper, “The New Orthodoxy: Constantine’s Christianity” on the panel “History of Christianity I: The Development and Formation of Christianity in the Early Church.” Baldschun, a senior majoring in religion, plans to attend graduate school to continue his studies. “It was a unique experience for me,” he says. “I got to experience and take part in the academic world that I hope to soon be a part of.”

The students all enjoyed attending the meeting and working as colleagues. “We all got to know each other much better through this,” Balschun says. “We got to step out of the day-to-day lecture and experience something new.”

“I was really impressed to see the students do research and present it and defend it,” Smith says. “It’s very satisfying to see how well they did. It shows how well a liberal arts education can prepare students.” 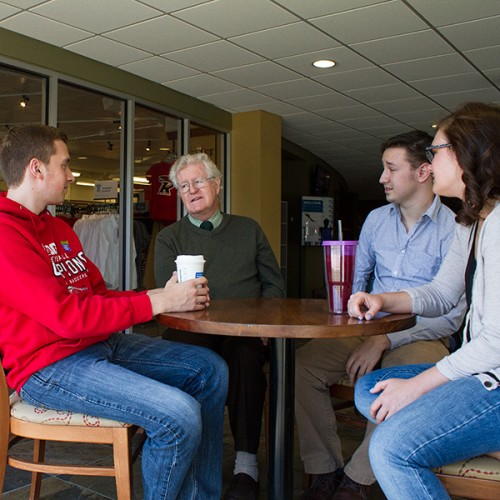