The Maya people fascinate us today, serving as fodder for popular books and movies. But who are these people? I initially was attracted to Maya art because of the beauty of its craftsmanship and the enigmatic nature of its subject matter; and when I came to learn about the tumultuous cultural history of the region in which it survived I become hooked on the topic.

The Maya area boasted one of the greatest civilizations of the ancient world and suffered a social collapse 1,000 years ago. The culture endured among the common people for another half of a millennium and then struggled to survive when the Spanish conquered the Yucatan. One reason I think it is important to study this region is that it helps us to understand how great art and cultural traditions can survive in extreme circumstances.

By training, I am an art historian, but I also am interested in culture more broadly, a fact that informs several projects on Maya art, culture and archaeology that I am involved with. Recently, I co-wrote a book chapter about art and buildings at an ancient Maya site called Yo’okop, located in the Cochuah, one of the least well-known but most historically important regions of Mexico. This was the center of the strongest Maya kingdom at the time of the Spanish conquest and later the center of a separatist Maya state.

Because of the instability of the region, intensive archaeological investigation at Yo’okop began only recently — the year 2000. The monumental architecture at Yo’okop still is overgrown with vegetation and there has been little architectural reconstruction there, but it was clearly a grand place in ancient times. The largest pyramid at Yo’okop is 28 meters tall, only two meters shorter than the well-known Castillo at Chichen Itza.

One of the most interesting things that my chapter discusses is the discovery of a Maya queen named Cha’ak Kab at Yo’okop. There was a sculpted staircase on a building at the site which contained beautifully carved, head-shaped hieroglyphs. My coauthors and I translated them with help from epigraphers, and they mean “Queen Cha’ak Kab is ruler of the site near an aguada.” (An aguada is a particular type of lake in this region.) We also discussed sculptures of two kings, a sculpture of a ball player, and ceramics that were found at the site.

I also have been researching indigenous sculptures from the ancient Maya sites Palenque and Tonina. In the 19th century, works of art from the former site were taken out of the temple for which they were made and placed in the façade of a local church. I am fascinated with the question of why a carving of an ancient Maya god and non-Christian king would be appropriate to display in this manner. Was it a celebration of the conquest of Mexico, an attempt to reframe the sculptures as Christian or something else entirely?

I suspect that it was an attempt to present them as Christian, as they were positioned similar to sculptures of prophets on other churches. More straightforwardly, I also have recently been fascinated by how sculptures of the kings from Tonina, which were originally full-bodied, were mutilated and placed in churches. More specifically, they were sawed in half at the waist and the legs were used as pedestals for baptismal fonts.

To give credit where it is due, I would like to note that projects I discussed here are variously being done collaboratively with the art historians Linnea Wren and Kaylee Spencer, and the anthropologist Justine Shaw. 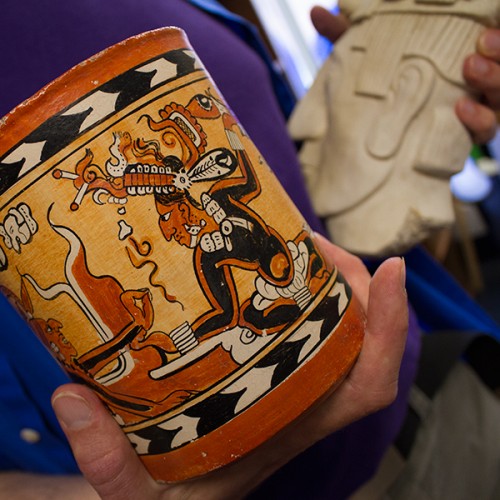