A novel chemical system that kills the Ebola virus on surfaces is being used to sterilize medical equipment and electronic items in the war on Ebola in West Africa. Invented by Dr. Christopher Doona ’86 and fellow researchers at the U.S. Army Natick Soldier Research, Development and Engineering Center in Natick, Massachusetts, this electricity-free, lightweight, portable technology converts dry chemical powders into chlorine dioxide (ClO2) gas, one of the best biocides available for combating contaminants that range from benign microbes and food pathogens to Category A Bioterror agents.

Unlike other methods of preparing chlorine dioxide, the Army system requires no power or caustic acids to generate the ClO2, nor is clean water required, making it ideal for use in remote field locations.

“ClO2 is a versatile disinfectant,” says Doona, “suitable for a number of cross-cutting applications in textiles, medical equipment sterilization, wastewater treatment, food safety, and personal hygiene. The system is adaptable and can produce ClO2 in small or large quantities and in varying concentrations, from potent enough to sterilize medical instruments to mild enough to use in toothpaste.

“Americans hear the news about outbreaks of E. coli, Listeria, and Salmonella from fresh fruits and vegetables,” Doona says, “and ClO2 can kill bacteria on fresh produce.”

Doona majored in biology and chemistry at Ripon College, completed a Ph.D. at Brandeis University, and was a National Science Foundation visiting scientist at the University of Würzburg (Germany) and an NSF postdoctoral fellow at Auburn University, and a Professor at Middlebury College (Vermont).

“The breadth and depth of the liberal arts education at Ripon College provided tremendous grounding in understanding the fundamentals of science, approaching education as a lifelong process, and encouraging willingness to learn and grow in new areas,” he says. “My education at Ripon shaped the way I think in approaching and solving problems. I spent many hours in Farr Hall learning from dedicated Professors (Earle Scott, Jim Beatty, Jean Tryon, Bob Wallace, Skip Wittler) who were driven by their passion and excitement for their fields.

“And the statue of Abraham Lincoln cutting down a tree in front of the science building is fitting, not only because Lincoln is the only president to patent an invention, but also because it symbolizes the work ethic and commitment Ripon instills in its students and that motivates me today in lab work, writing books, publishing papers and patenting inventions.”

His current work involves a new system for anti-microbial food packaging to safely extend the shelf-life of fresh fruit and vegetables that should be available next year. “Even with the successful commercialization of this (ClO2) technology, we are still unraveling details of the complex reaction mechanism and just published an article in the International Journal of Chemical Kinetics and Journal of Visualized Experiments,” Doona says.

“To have originated this work, matured it as a commercial technology, and to know that it is helping fight the spread of Ebola during this crisis for so many healthcare workers and patients in vulnerable populations is simply magnificent,” he says.

More information is available through the following this link and this link. 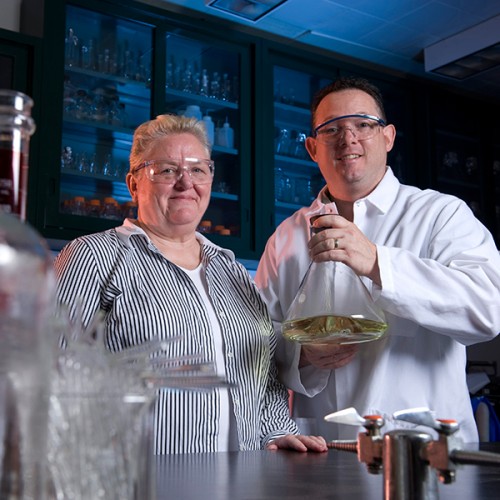