The probability is, this collaborative research yielded a great new app

Probability has gotten a little easier to understand with joint research by Logan Soich ’15 of Franklin, Wisconsin, who majored in economics and mathematics, and Assistant Professor of Mathematics and Computer Science Chester Ismay.

In January, Soich and Ismay gave a presentation about the research at the Joint Mathematics Meeting in San Antonio, Texas.

Soich took Ismay’s Math 331 course in the fall of 2013 and passed the first actuarial exam. He since has gone on to pass two more exams. During the spring semester of the same year, Soich took Ismay’s Computer Science course. Ismay had been looking into creating an applet in Rstudio, an app-designing program which writes in “R,” the common programming language used among statisticians.

The “shiny package” makes it easy to code apps, Soich says. He had developed a passion for programming, so when he approached Ismay about the subject, they mutually decided to create an applet together.

“We applied for and obtained a summer research grant through the dean of faculty to develop the applet and curriculum for my fall 2014 Probability course,” Ismay says. The applet was created to view different probability distributions and to calculate variances, probabilities and means. It is designed to help students visualize how different properties of probability work, he adds.

The applet now is being used not only by staff of Ripon College, but also staff at Indiana University, the University of Central Florida and Northern Arizona University. In addition, professors at five other schools have shown interest in using the app.

Soich and Ismay’s probability applet is available for free here. 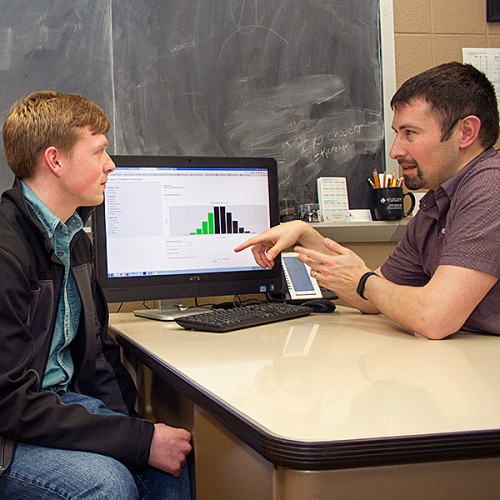