When she read the story again — in an anthology published in 2010 — something seemed off. The modernist, stream-of-consciousness story deals with bisexuality and interracial relations. In the original version, the main character was first with a man and ended with a woman. Warczak recalled the line, “One can love two at the same time.”

In the anthology version, the final page-and-a-half was omitted, leaving the lead character with the man.

“No one has really figured out the two versions,” Warczak says. “What I looked at was the character’s sexuality because he is interested in both men and women. Depending on how one reads the story, he is either homosexual or bisexual.

“I also explored the influence of the time period on the story. The 1926 ending was more reflective of the times in which the piece was published. In the 1920s, anything not strictly heterosexual was controversial to write about. Having a woman at the end would have been acceptable, a placating ending.

“Since that time, a lot of scholars have interpreted ‘Smoke, Lilies and Jade’ as a homosexual text. So my theory was that in 2010, homosexuality was more accepted as a lifestyle. The authors cut out that last section in order to keep with the times, yet stay true to what they perceived to be Nugent’s intentions.”

Warczak presented a paper about her research in March at a conference held by Sigma Tau Delta, the English national honor society for colleges, in Albuquerque, New Mexico. She says the paper was well-received and she was complimented by several attending professors.

“It was good to see how everything went in terms of an actual conference and how it all works in practice,” she says.

Warczak has been interested in modernism in early 20th century literature since she was a freshman at Ripon. She wanted to learn more about the “Great Gatsby” ear, and her interests expanded to include the Harlem Renaissance movement, revision of modernist texts and how we perceive modernists texts today.

She spent a semester doing research and writing a 30-page paper at the Newberry Library in Chicago. This summer, she is doing independent research through the Moore Undergraduate Research Apprentice Program at the University of North Carolina, Chapel Hill. She will produce a 20-page paper and present on it at a seminar with other professors and students who are part of the program.

Her research opportunities “mean the world” to her, Warczak says. She greatly enjoys the research, but she also is aiming to be an English professor at the college level. She is majoring in English and history; with a minor in German.

“These experiences are fantastic for building my resume. I really enjoy the research aspect of it, but I’m also interested in the teaching. I come from a long line of teachers, and I did actually inherit that teaching gene. I want to help students understand literature and why it is significant, and serve as a mentor in helping them pursue their own research interests.” 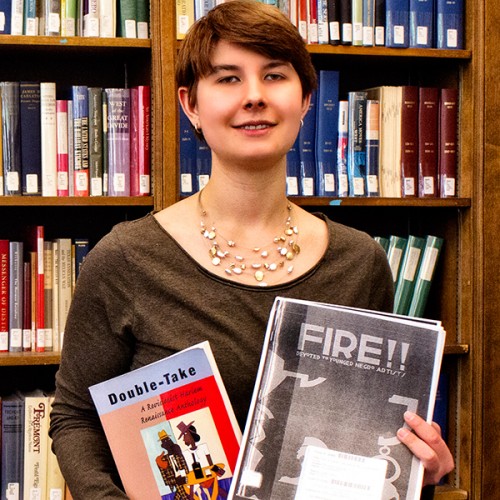