Chang ’64, a caregiver, writes book for children about Alzheimer’s

“I knew when I went into retirement that I wanted to write a children’s book,” says Juvenna “Jeve” Chang ’64 of Honolulu, Hawaii. It was two years before the story concept came, but then one evening it did. She sat down and wrote the whole story in one night. “When I finished, there were tears in my eyes,” she says.

Chang retired in 2008 to care for her husband, Charles, who had been diagnosed with Alzheimer’s disease. She completed writing her book, Why Can’t Papa Remember My Name? in 2011, shortly after her husband’s passing. She self-published the book with Trafford Publishing two years ago. The book is available on amazon.com.

When Chang’s husband was diagnosed with Alzheimer’s, she began to research his condition. “There was a lot of literature on the disease written for adults, by adults, and about adults — but adults aren’t the only ones affected by this disease,” Chang said. The scarcity of materials for children related to Alzheimer’s motivated Chang to write this book.

While caring for her husband, Chang observed the way his Alzheimer’s was affecting her grandchildren, in particular her eldest grandson, Kaiya. Kaiya knew his grandfather well before his illness began to progress, and Chang recalls the special bond the two shared. She wanted to write a book to help children like Kaiya understand Alzheimer’s.

The story was inspired by the relationship between Kaiya and his grandfather. Kaiya notices his Papa struggling to remember his name. Kaiya makes three efforts to help his grandfather remember his name, including giving him a bracelet with his name on it, but none of these methods work. Over time, Papa begins to act very strangely, putting objects in odd places, or acting as though he were a tennis teacher again. Kaiya has to face the reality that his Papa has a more serious problem than just forgetting his name.

Chang attended a support group for people whose loved ones had Alzheimer’s. She learned a lot about the disease, how to better care for her husband, and how to better cope with the way his illness affected him. Being in the comfort of others during her husband’s final years was invaluable to Chang.

This year, after retiring again, she was trained to be a facilitator of a support group which meets once a month. “I thought it was one of the ways I could give back to the community,” she says. Chang also serves as a working group member for the Alzheimer’s Association, Aloha Chapter to extend services to the Native Hawaiian community. She volunteered to assist by sharing information at the Alzheimer’s Booth at a Senior Fair held recently in Honolulu.

Chang hopes people will become more aware of Alzheimer’s and that better treatments will be made available. She hopes there will be less of a stigma around dementia and other related illnesses, and that people will get tested for Alzheimer’s early so more preventative measures can be taken.

“My husband was a kind and generous man,” she says. “The person I took care of throughout his illness was not the same person. At least he knew who I was until the very end. For that, I’m grateful.” 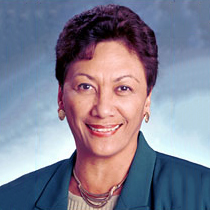