An award-winning bakery in Philadelphia, the Flying Monkey Bakery, has quickly gained internet attention because of its delicious Pumpple Cake. In late November, the bakery and Pumpple Cake were featured on a special Thanksgiving episode of “Guilty Pleasures” on Food Network.

Elizabeth Halen ’03 is the owner of the bakery, which celebrated its fifth anniversary on Oct. 1. Her foundation in the liberal arts and sciences gained at Ripon College led her to think outside the box when it came to a career choice.

After graduation from Ripon College, Halen went directly to graduate school at Temple University in pursuit of a Ph.D. Her passion for baking followed her wherever she went, and even as a Ph.D. student in Philadelphia she gained additional income by baking sweets for local restaurants.

Halen quickly fell in love with the culture, arts and food in that historic city and decided half-way, through to pursue a completely different career. “Ripon taught me that your first choice isn’t always the right choice, and as the years went by, I knew my talents for baking were stronger than my talents in the classroom,” Halen says.

It wasn’t easy for Halen to enter the pastry world full time. She juggled three jobs and managed to get her own wholesale business off the ground by working out of a friend’s restaurant kitchen after hours. Her dedication and passion persisted, and she finally bought a small bakery, now known as the Flying Monkey Bakery.

The bakery has become a huge success, landing features on Outrageous Foods on Food Network, The Today Show and The Rachel Ray Show, and it is scheduled to be featured on two more Cooking Channel and Food Network shows this fall.

The quick success of the Flying Monkey Bakery was due to the creation of the Pumpple Cake. “Pumpple cake is a two-layer cake with a pie baked inside each layer,” Halen says. “The bottom layer is chocolate cake with pumpkin pie baked inside, and the top layer is vanilla cake with apple pie baked inside. The layers are filled and frosted with vanilla Swiss meringue buttercream.”

Halen also has won the 2014 “Best of Philly” award for her Whoopie Pie. The award is presented in various categories by Philadelphia Magazine, and voted on by local Philadelphians.

And recently, she was a champion on an episode of “Sugar Showdown” on the Cooking Channel, where she won $10,000 in prize money using cheese curds as a secret ingredient and operating under a “Wedding Cake” theme.

By doing what she does best — baking — Halen gets to share her love of pastries with everyone.

You can view a YouTube interview with Halen here. 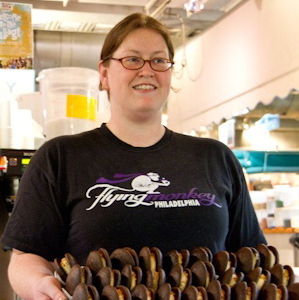