“İPura Vida!” is a common Costa Rican phrase which translates to “Pure Life!” We have been studying all kinds of pure life in our Liberal Arts In-Focus course titled “Field Studies: The Challenges of Biodiversity and Conservation in Costa Rica.” Nine Ripon College students along with Professors Diane Beres, Karl Beres and Memuna Khan arrived in Costa Rica on Jan. 1 and have spent time thus far in the Carribean Lowlands of Sarapiquí County.

Here, we are staying at the Tirimbina Rainforest Center, a private reserve dedicated to preserving the lowland rainforest in its natural state.

We have hiked many trails in Tirimbina and have noted many interesting species, including the three-toed sloth, the red-eyed tree frog (an absolute staple of Costa Rica) and the Keel-billed Toucan (Fruit Loops anyone?).

Our group also visited La Selva Biological Station, one of the world’s most important sites for research on tropical rainforests. Here, we hiked across a hanging bridge and saw species including white collared peccaries (wild pigs), white-faced capuchin monkeys and great green macaws, which are so endangered that there are only 500 breeding pairs left in the wild.

Our class had one particularly exciting experience during a night hike around the Tirimbina Field Station. The previous night, we had seen a smoky jungle frog in a burrow along the trail; the next night, we found a fer-de-lance snake in the same burrow. According to our field guide, the fer-de-lance is the most feared and deadly snake in Central America! After inferring that the smoky jungle frog had become the snake’s latest meal, we hastily fled.

The class continued to experience wildlife as we rafted down the Puerto Viejo River, where we saw the striking green basilisk lizard, a river otter and two green blue herons. We also swam with fruit-eating piranhas and watched as they attacked pieces of pineapple we dropped in the river. Our stay at Tirimbina further included a chocolate tour, where we explored the process of chocolate production from the cacao plant to the delicious dark chocolate bar.

Next, our group will be heading to La Fortuna, a small town near the Arenal Volcano. Stay tuned for updates from our adventures. 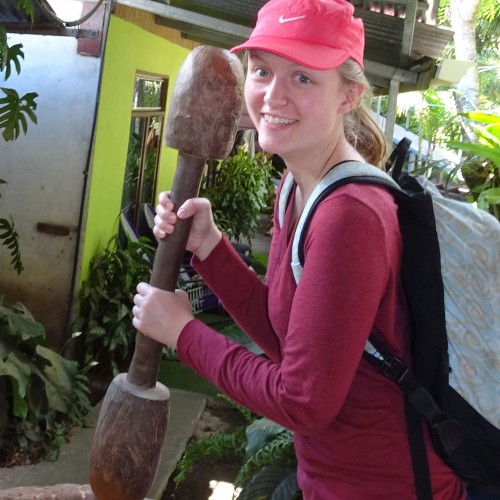