Hello and welcome to part two of the Costa Rica Field Studies blog! On Jan. 6 and 7, we explored the city of La Fortuna and the surrounding area, including the famous Arenal volcano. La Fortuna translates to “the fortunate,” which is an accurate title for the city.

Before 1966, the city was formerly known as El Burio. However, 1966 marked the eruption of the Arenal volcano, previously thought to be a large hill or completely inactive. Multiple towns around the volcano were destroyed, yet El Burio was spared, and so the name was changed. Since then, the town has changed from a quiet burg to a bustling tourist attraction for people wanting to see the landmark of Arenal (us!).

Today, the Arenal volcano is within the top 10 most active volcanos in the world. While the volcano does not spit out any lava, the noxious gas that comes out makes it extremely dangerous for anyone to climb. Near the volcano itself, the Arenal National Park allows tourists a chance to see the volcano and experience the lowland forest that surrounds it. While following the trails within the park, we saw many amazing creatures, including a gold silk orb-weaving spider, wolf spider and green parrot snake. At the end of the trail, we actually were able to climb on volcanic rocks that came from Arenal a long time ago. This lookout spot gave us a great view of the volcano enshrouded in fog.

We also had a chance to explore the center of La Fortuna and immerse ourselves in observing the way the community works. To get a mental image, the boom of the town for tourism gave a feel somewhat like Wisconsin Dells. Many signs and souvenir shops were presented with English and prices in U.S. dollars rather than Costa Rican colones. The locals were very accepting of all the tourists, ourselves included. We even met a group from UW–Eau Claire who were on a medical tour.

Our exploring and learning about the natural environments of Costa Rica has been a great experience. It is a change of pace and also eye-opening to be able to see more of the urban and human side to the country.

Keep a watch for more updates about our trip, including our travels through the Monteverde region!

(Photo: At Arenal National Park. There is supposed to be a volcano behind them, but it is hidden in clouds.) 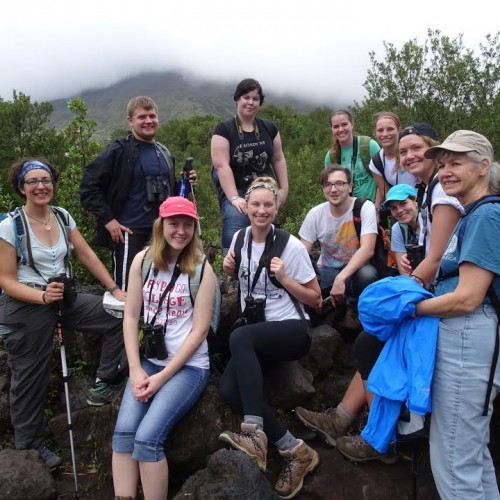