“The Mitzvah,” a one-person play about the hidden tragedy of Jewish soldiers who fought for Hitler, will be presented March 22 at Ripon College and will be followed by a lecture and audience discussion. The event features actor and the child of a Holocaust survivor, Roger Grunwald, who is also the play’s co-author. The evening will run from 7 to 8:30 p.m. in Todd Wehr 104 on the College’s campus. “The Mitzvah” is co-written and directed by Broadway veteran Annie McGreevey.

The play, lecture and discussion — also known as The Mitzvah Project — engages issues of identity, prejudice and the moral dilemmas faced during the time of The Shoah. The event is being brought to Wisconsin by the Nathan and Esther Pelz Holocaust Education Resource Center of Milwaukee and the Wisconsin Humanities Council, and is sponsored at Ripon College by the departments of history and religion and the Center for Diversity and Inclusion.

The play is a dramatic exploration of one of the most unsettling and shocking stories of World War II concerning the history and fate of tens of thousands of German men called “mischlinge” —the derogatory term the Nazis used to characterize those descended from one or two Jewish grandparents — who served in Hiter’s army. The tragic story of one such mischling, who became a decorated officer, is at the center of “The Mitzvah.”

The post-performance lecture examines the history that gave rise to tens of thousands mischling-soldiers — the story of two centuries of assimilation, intermarriage, conversion and striving by generations of German Jews who were committed to calling The Fatherland their home.

Between the years 1870 and 1929, it is estimated that in both Germany and Austro-Hungary, some 84,000 mixed marriages took place. Based on that number and the estimated number of religious conversions and intermarriages that occurred during the preceding generation, it is probable that more than 98,000 quarter Jewish and 92,000 half-Jewish men would have been eligible for military service during the Second World War. The current conservative, albeit shocking, figure for mischlings who actually served in the Wehrmacht (that is, in all branches of Germany’s World War II armed forces) is 150,000. That number includes soldiers and officers as well as Field Marshals and Generals. The Luftwaffe’s second in command, Field Marshal Erhard Milch, was a half-Jew.

“I was originally inspired to develop ‘The Mitzvah’ as homage to my mother, who, as an Auschwitz survivor, used her wartime experience as a tool for teaching the lessons of history to young people,” says Grunwald. “With my mother’s generation dying out, ‘The Mitzvah’ is the fulfillment of my posthumous promise to her to use my skills as a writer and performer to connect the theatre and its capacity to touch people with the historical necessity of keeping the lessons of the Holocaust alive.”

Grunwald has been a professional performing artist for almost four decades. In 2013, he was honored with a grant from the New York Foundation for the Arts (NYFA) for the development of The Mitzvah Project, which has been touring America since April 2014. 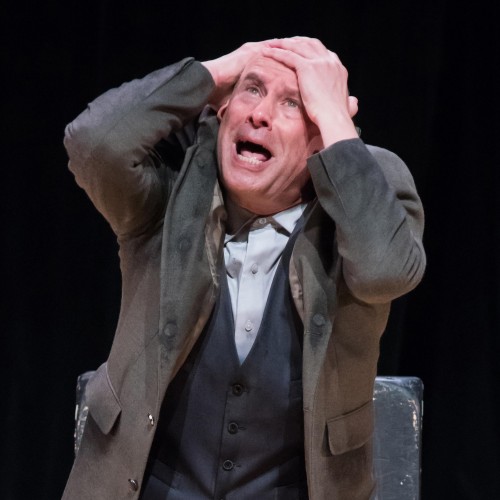