“Beyond the Left-Right Divide: Partisan Polarization, the 2016 Elections, and the Future of American Politics” will be presented Tuesday, April 19, at Ripon College.

The talk, presented by the Center for Politics and the People, will be given by Michael Wagner, an associate professor at the University of Wisconsin-Madison. It will run from 11:15 to 12:15 p.m. in Kresge Little Theatre, East Hall, on the campus. All are welcome to attend.

The talk will describe how what we think of as the contemporary political divide in the United States is far more complicated than it appears in the typical “red state-blue state” coverage we see in the news media. While we tend to think of Americans being “liberal,” “moderate” or “conservative,” American public opinion primarily is organized around two types of issues: economic and cultural.

“Things get complicated because some people have liberal views on both types of issues, some have conservative views on both types of issues and others have views that are liberal on some issues and conservative on others,” Wagner says. “My talk will describe the far-reaching consequences of this insight from party identification, voting behavior, political participation, media use, the 2016 elections and the future of American political conflict.”

Wagner is associate professor and Louis A. Maier Faculty Fellow in the School of Journalism and Mass Communication at UW-Madison where he directs the Physiology and Communication Effects (PACE) Lab. He also is affiliated with the Department of Political Science.

Wagner is a former political reporter whose academic work centers around the question, “How well does democracy work?” He has published numerous books and articles on the political behavior of the American electorate and the role played by media, and he also has done live debate and election coverage on Wisconsin radio stations. 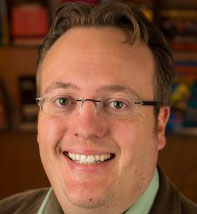