Two Ripon students are working to bring pride and community to downtown Ripon with their project, “Those Who’ve Called Ripon Home.” On April 15, they presented at 314: Ripon College Project Space in conjunction with the Ripon Historical Society. The night was one part walking tour and one part gallery exhibit showcasing important figures from Ripon’s history.

Zachary Peterson ’16 of Bloomer, Wisconsin, was inspired to take on the project by his friend, retired Professor of History William Woolley. Holly Erickson ’18 of Union Grove, Wisconsin, later joined the project. Work started last June as part of a history course taught by Associate Professor of History Rebecca Matzke. Over time, it evolved into an independent study and a project that received a grant from the President’s Office.

The project came together with assistance from the College’s marketing and art departments and with support from friends and teachers such as Matzke and Woolley. “It’s been very collaborative; we could not have done this on our own,” Erikson says.

The walking tour focused on less recent figures, and those featured on the tour were narrowed down from 40 potential candidates. Selections included both those who had been involved with the College and those who had been born in Ripon. Among them are women’s suffrage leader Carrie Chapman Catt, American film actor Spencer Tracy and politician and college founder Warren Chase.

“As college students, it was refreshing to see who else has been here,” Erickson says.

The gallery showing included posters and binders giving information about each person featured. Members of local businesses signed up to keep one of the posters in their place of business.

Posters and informational brochures are the next step in the project, encouraging patrons to learn about Ripon’s history and visit other shops to learn about other historical figures. Peterson and Erickson hope bringing more history to the College and downtown area will have positive effects on the community.

“History majors do more than timelines and dates,” Peterson says. “We get to the heart and see what has carried on.” 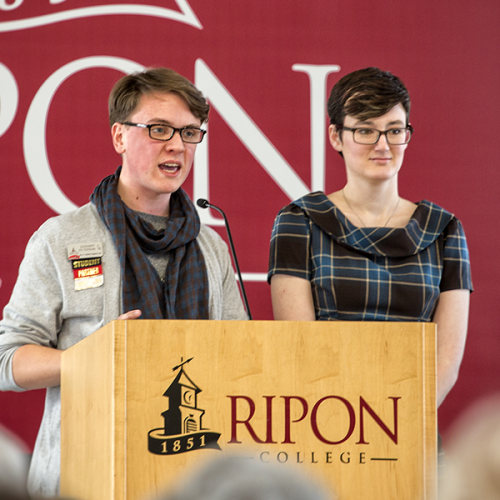