In the game of soccer and in the game of life, says legendary women’s soccer coach Pia Sundhage, passion and teamwork are important for achieving the best.

The theme for Ripon’s 150th Commencement was “Women, Athletes and Coaches: A Half-Century of Progress” and highlighted the changes in women’s sports since the introduction in 1972 of Title IX, the federal civil rights law that prohibits sex discrimination in education.

“I won’t give you any advice,” Sundhage told the graduates. “You have to figure out yourself to find what you’re looking for out in the world. You have a big chance to reach your goals if you have passion.”

She said former American soccer player Kristine Lilly told her, “Your passion for soccer is contagious,” and she is learning from those words.

“Soccer is a teamwork; life is a teamwork,” she said. “Different people work well together. Diversity is important. Being alone, I’m pretty much useless. Working together with other coaches, I could be the best. (I ask my players), ‘When you look in the mirror, what do you see? What do you want to see?’ ”

“I believe in people. My glass is half-full. I put on my positive glasses, and I’m always searching for good things. My philosophy of leadership is to try to live to learn and learn from living. I wanted to be kind; I wanted to be humble; I wanted to be positive; and I had to practice that.”

When Sundhage was growing up in Sweden, girls weren’t allowed to play soccer. “Girls were supposed to toss the ball; boys could kick and ball and compete.”

She said her mother told her she could do whatever she wanted to do, and she really loved kicking the ball. The coach said, “We will call you Pelle instead (that is a boy’s name), and you’ll be fine. I played with boys. For two years (as Pelle) I was running and chasing that ball.”

She got into coaching because of her passion for the game, she said. “I had so many opinions of how you should play. I had too many opinions. My coach got tired of me. It’s a complicated game. I love the fact that it’s teamwork, playing with others. It is a wonderful game.”

Little by little, she says, women’s sports are getting more recognition and respect that they deserve, but it’s a hard-fought battle that takes a positive outlook. “I am a happy coach, happy person and don’t take myself too seriously,” Sundhage said. “What a wonderful life. I am a coach. I try to stay forever young in my heart.”

Elaine Coll was the ceremony’s second honorary degree recipient. She founded the modern-day women’s intercollegiate athletic program at Ripon College in 1973. She organized and coached women’s volleyball, basketball and track and field until her retirement in 1993.

“Women’s sports were not on most radars in 1972,” she said, until Title IX ushered in women’s intercollegiate athletics.

“Coaching was always a dream of mine,” she said. “There were no women coaches, so it was a far-off dream. Teaching physical education was the closest a woman could come to sports and the feel of movement. (With Title IX), something that was not possible was all of a sudden reality. There were no varsity women’s sports until 1973. We all benefited from Title IX, bringing sports to the entire student body.

“It was so fun,” she said. “It was all new. The women just wanted to be there and play. They players became more assertive and successful. It makes them more mature in many ways.”

When some of her players showed a lack of motivation, she would remind them, “ ‘How many of your mothers got to play on a college team or any team?’ And I was one of those mothers!” she said. “They would stop and think about the possibilities of what they had.

Senior Class Speaker Yessra Sankara ’16 of Oshkosh, Wisconsin, said, “Look how far we have come. It’s been four years of stress, laughter and many, many memories.” As she and her classmates prepare to move forward into the future, she said, she offered a few words of wisdom from her faith’s Koran, translated to “For every hardship there comes ease.”

“There will be struggles (for us), but with dedication and commitment we will get through it,” she said. “We have become strong, more refined and more intelligent versions of ourselves.”

She said she and her fellow graduates can look at who they have become, who they can become and how they now can move forward and give back “by enacting the life lessons of being actively engaged citizens that Ripon College has taught us — the importance of philanthropy, giving back and being civically engaged,” she said. “We must fight and live and never give up on the values we have learned here. Take this degree and do something relevant and positive with it. Your dreams will guide you on your path.” 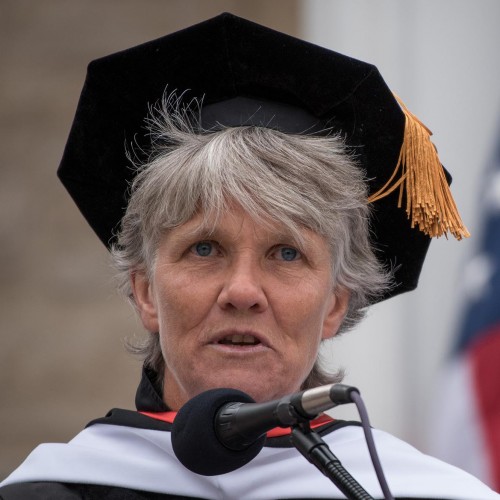