Well, I am finally done. The last four years of my life are now embedded in a piece of paper that tells me I made it: that I survived what some may call the hardest portion of the easiest part of my life. Validating this accomplishment is my diploma, written in Latin (hopefully if an employer ever needs to see my diploma, he or she is a Latin scholar). All throughout these last weeks and days at Ripon I felt a flurry of emotions as I was being propelled into the “real” world. I felt free from an assortment of assignments, happy to move on to a whole new adventure, excited to chase new horizons, nervous for the next steps in my military career, and sad to say goodbye to friends and professors I have become close to over the past few years. In all, I am proud of the path I have walked during my time at Ripon College and I am proud of my culminating experiences.

A few particular life-changing events happened as my time at Ripon wrapped up, including commissioning into the Army, getting married, and buying a puppy. The first of these – commissioning – has been the culminating experience of my four years of ROTC. Over these years I have learned not only self-discipline, but have also begun learning the art of leadership (a lifelong study). Reflecting on my time in ROTC after graduation has shed light on how much I have developed as a leader and as a person, by and large due to the stewardship and guidance from the cadre who have mentored me along the way. Yes, of course, I have learned the physical and knowledge-based aspects of the curriculum as well. These include physical fitness, ruck marching, rope climbing, land navigation, and tactics just to name a few. But the most valuable aspects that I will be walking away from college with, what my four years in ROTC at Ripon has prepared me well for, is the intangible aspects of being a leader and an Army officer: the intangible skills of interacting with others. That being said, I am currently preparing to attend IBOLC (Infantry Basic Officer Leadership Course) down at Fort Benning, Georgia, after which I hope to attend Ranger School. These courses will be very challenging, both physically and mentally, but I am excited for the new adventures and possibilities that lay ahead of me at the beginning of my military career.

Additionally, in the months preceding graduation, knowing that I would soon enter into a military career and be away at training for a long time, my wonderful fiancée and I married shortly after I received my orders. We had tentative plans for different scenarios based on when my military career would start. Marriage was a big leap for both of us; we have been together for over six great years and decided that getting married before I left would be the best for us, and we were ready for the commitment. In our quick planning for our wedding, we set a date and picked the location – a city park under a white gazebo. Well, every couple has certain experiences and oddities that make their wedding day and relationship special, and I can definitely say that our day will be one of the most memorable days of my life. We had hoped and prayed that the weather would cooperate for an outdoor ceremony, but as the day approached, the more convincing it was that precipitation would be a certainty. Due to time restraints, we did not have a back-up plan. Long story short, Mother Nature sure brought precipitation on our wedding day – she delivered a furious blizzard. Despite some of the days leading up to the ceremony being nice and warm, we experienced a memory of a lifetime as wind blew near white-out conditions of snow sideways during our pictures and service. To some, this could have been frustrating or destructive, but we are grateful for the unique picturesqueness and the beauty amidst the storm (almost a metaphor for any relationship or life in general). Since our marriage, not much has changed other than the fact that I can now call my best friend my beautiful wife.

Lastly, I have just recently purchased a German Shepard puppy. Purchasing a puppy was not in the life plan leading up to graduation, but it was rather a spur-of-the-moment process. How this unfolded was my wife told me one day that her friend’s relative had a one-year-old German Shepard that needed a new home. This sort of thing is nothing out of the ordinary – knowing that I have always wanted a dog, a German Shepard or lab to be exact, she had been sending me videos and pictures of puppies that she found online or on Facebook. After determining that there was a possibility of getting a dog, we started looking into it and after a matter of three or four days and multiple visits to see dogs, we decided to purchase an eight week old German Shepard puppy. We decided that now would be the best time for a puppy because she would have the training support of her parents and other friends and family in the area while I am away at IBOLC. If we waited longer, depending on where we end up, we may not have the time or support from others to help train and take care of a puppy. Also embedded in this deal was a compromise of sorts. I wanted a dog, but she wanted a puppy. So, knowing I would be leaving soon, she would be able to experience the puppy phase and I would be able to have a dog after I return from my training. Being new puppy-parents we didn’t quite know what we were getting ourselves into, but I am learning some things pretty quickly as we navigate food, schedules, and house-training.

Life is moving at an extremely fast pace. Big life changes have been hitting rapid-fire as my time at Ripon concluded and my new career is about to begin. I do not know the answers to everything, nor am I quite prepared for everything life may throw at me, but with the experience and knowledge I have acquired, with the excellent support from the friends and family who have gotten me this far, I am ready to overcome whatever may come my way. I have just cleared some of life’s major stepping stones, and now I stand on the verge of new horizons. 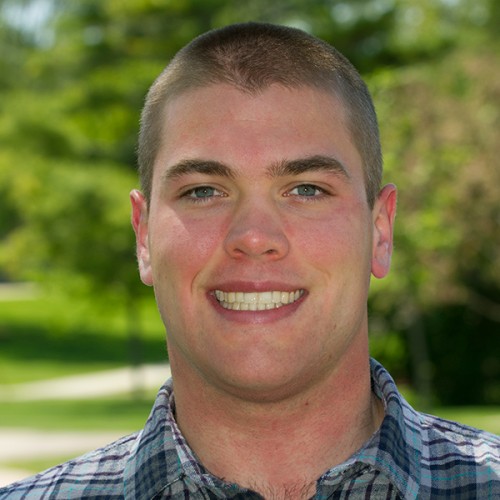