Research prepares recent graduate for his future in the military

“Apocalyptic Islam: What Makes ISIS a Serious Threat to America” was the senior research project for Jacob Sahr, examines the role ISIS plays in national security.

Jacob Sahr of Menasha, Wisconsin, was a history and politics and government double-major, and also completed a military science minor. In his research, he examined the role ISIS plays in national security.

“I knew ISIS was a major deal,” Sahr says. “I am very interested in the military. I knew that it would be applicable to my future and wanted to educate myself on the field before I got into it.”

Another reason for this research was the media’s frequent mishandling of information surrounding this topic. “I think the media misconstrues ISIS,” Sahr says. “The news doesn’t want to call it radical Islam, but in college it is necessary to bring these topics up. My paper was an attempt to bring up something that was a little edgy, and not really acceptable in the medias’ eye.”

Sahr also researched the current Obama’s administration’s policy towards Isis. “I think the media has over-inflated the ability for the policy of airstrikes to work,” Sahr says. “It hasn’t highlighted the ability of ISIS to garnish support.”

While Sahr did not advocate any specific policy following his research, he did find that ISIS poses a significant long-term risk to national security. “Isis has created a potential for long-term threat if we don’t deal with it now,” he says. “This research has broadened my perspective on intelligence and how other countries have to work together to reduce a threat.”

Sahr now is transitioning into the infantry. He is signed up for an eight-year commitment consisting of four years in infantry and four years in intelligence. Because of his research at Ripon College, Sahr says he feels more prepared for his future. “ I plan to go into military intelligence, and I have to understand threats,” he says. “This has given me that intellectual ammo.”

The biggest take-away he says he has is that “People need to do more research like this. I think people rely too much on the media or what they are told. I think the liberal arts give people the ability to understand issues or problems.” 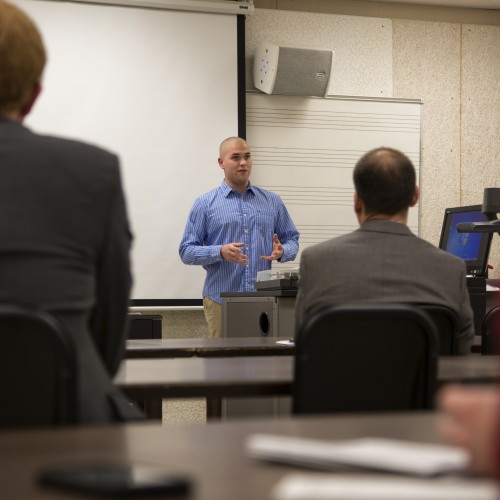