The common view of hell has evolved and changed over the centuries. For her senior showcase, recent graduate Myat Aung of Yangon, Myanmar, studied part of this evolution. Aung, an art history and classical studies major, examined the influences on William Blake’s depiction of hell in his paintings.

Blake, a 19th-century artist and poet, painted adaptations of Dante’s Inferno, an epic poem written five centuries before Blake’s time. Blake taught himself Italian in order to read the poem in its original language. To get a better understanding of his art, Aung read over several translations of the poem herself.

“I was looking for the context and why William Blake painted certain types of imagery,” she says. “I was looking at the original text and the deviations that Blake made. It was a Medieval Latin/Italian text so I had to look at lots of different translations.”

Aung found that some of Blake’s deviations were influenced by Blake’s life in London during the Industrial Revolution. “The first thing I noticed was the use of clouds,” she says. “In Dante’s Inferno, Dante talked about clouds but didn’t extensively say anything about them. But in William Blake’s art, he used a lot of this type of imagery. I compared it to the smokestacks that came out out of all these different factories in London.”

By comparing industrial London to Hell, Aung believes Blake was expressing his bitterness toward the changing times. Using hellish imagery to criticize society was not something that set Blake apart from Dante, Aung says.

“Dante was basically criticizing Florence and political and social life at the time,” she says. “William Blake was seen as crazy recluse, but he was subconsciously engaged in this type of movement in his time.”

The parallels between Blake and Dante are especially striking, since Dante was a Catholic and Blake was a secular mystic, and the two were centuries apart. The image of hell they had was similar in many ways, Aung says, and both used the idea of hell to express their thoughts about the times in which they lived.

“Through religious imagery — which is very interesting because it makes it sound like (Blake) didn’t want to face the reality — he commented on the secular industrial life,” Aung says.

For this project, Aung combined all her skills. She examined the imagery in Blake’s paintings and the text which inspired him, and she became aware of Blake’s life and history. While Blake was not well-known during his time, he is now a significant figure when analyzing both depictions of hell and the industrial revolution, Aung says.

“People overlooked William Blake as an artist, but he contributed so much to the understanding to the industrial revolution with both his literature and his art,” she says, “so I think he’s pretty significant because of his time.” 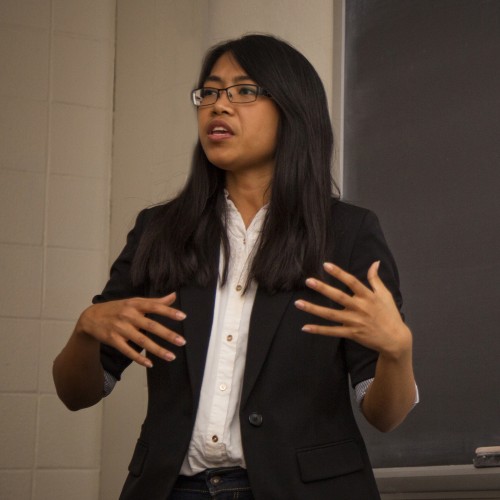