When UW-Extension representative Diana Tscheschlok proposed a significant project to Professor of Business Management Mary Avery, who now is recently retired from Ripon College, Avery knew just the students for the job.

UW-Extension is an outreach program offering access to resources and mentors to all Wisconsin campuses. The project was to interview and collect data on minority entrepreneurs in the Fond du Lac County.

Four Ripon College students were assigned to the task: Leandre Somé ’17 of Ripon, Wisconsin; Fanglin “Vivian” Bai ’16 of Henan, China; Lucero Pena ’16 of Beaver Dam, Wisconsin; and Daniel Zipperer ’l8 of Necedah, Wisconsin. Each student comes from a minority background, and three are multilingual, which proved invaluable to their work. The students found that their similar backgrounds lead to entrepreneurs opening up to them.

“We had the fact that we could relate to the entrepreneurs easier; that’s why we were chosen for the project in the first place,” Somé explains.

“I am a member of the Menominee tribe in northern Wisconsin,” Zipperer says. “This allowed me to reach out to people in the Brothertown tribe in Fond Du Lac. Being Native allowed me to be more welcomed into their operations, and the people were incredibly friendly to me. I don’t know if it was because of my tribal status, but it seemed to help.”

The students had the entrepreneurs fill out surveys and compiled their answers in many ways. Tscheschlok helped with data analysis and with setting up interviews, and served as a mentor to the four during the project.

The focus of the project was to discover what barriers minority entrepreneurs may face. Common issues were language barriers, trouble advertising and difficulty finding startup capital. Many of the business owners avoided bank loans or were denied when they pursued them, several turned to their families for money and some received aid from fellow business owners.

Over the course of the project, these students developed new skills and formed important relationships with business owners in the area. “It was challenging, but we definitely made some connections along the way,” Pena says. “I still keep in touch with some of the entrepreneurs, and they’re there for me to guide me after college if I ever want to open up a business.”

Somé adds, “The interviews were the most inspiring and interesting part. Forty-five minute interviews turned into two hours. It was really humbling. They were real people doing real things in the real world.”

Pena and Somé both aspire to own businesses in the future. Although Zipperer is unsure if he will follow the same path, but he knows this: “Wherever I work, I want to work with entrepreneurs. They are very intelligent members of our society and don’t get enough credit for the big accomplishments that they make.” 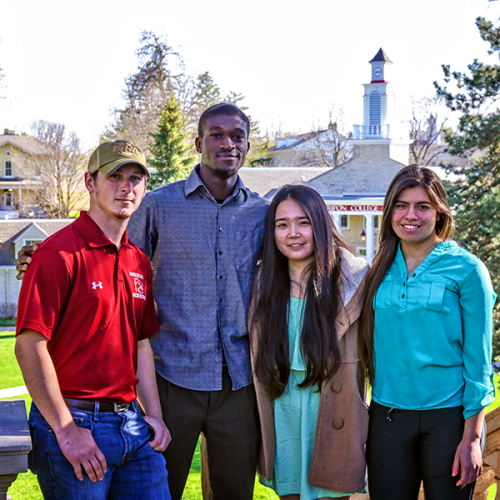