Passion for public speaking, love of learning sparked at Ripon

Ben Firgens ’14, originally from Oregon, Wisconsin, transferred to Ripon from the University of Wisconsin-Fox Valley. As a student at Ripon College, Ben helped welcome other new students as a member of the orientation committee, competed as a member of the Red Hawks mountain bike team and fell in love with public speaking as a participant in the communication department’s Speakers Bureau.

“I chose to start at a two-year campus in order to complete my general education requirements at a manageable scale and price, while allowing myself to later specialize into a major and career path at a school of Ripon’s caliber,” Firgens says.

“I chose Ripon because I wanted to attend a small liberal arts college that was close to home. The transfer process was pain-free. All of my credits transferred, and the orientation session specifically for transfer students helped me jump into student life at Ripon right away.”

After graduating from Ripon College with a major in communication and a minor in English, he nurtured that love of public speaking into a full-ride scholarship into the communication arts and sciences department at Pennsylvania State University in State College, Pennsylvania, where he is earning a Ph.D. in rhetoric and technology.

He also is teaching introductory courses in public speaking, message analysis, and persuasion and propaganda.

“While the academic foundation that Ripon College gave me has proven itself rock-solid, the diverse opportunities to learn outside of the classroom are where I really owe the College thanks,” Firgens says. “Ripon taught me nothing less than a lifelong love of learning.” 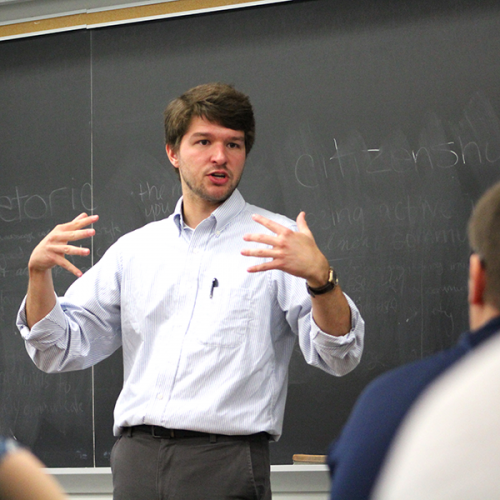