Artwork in print media will be shown at Ripon College

Print media by John Hitchcock, which explore relationships of community, land and culture, will be on view Nov. 4 through Dec. 9, 2016, at Ripon College. The exhibit is part of the Caestecker Fine Arts Series and will be shown in Caestecker Gallery, C.J. Rodman Center for the Arts. It will open with an artist’s talk at 4 p.m. Nov. 4 in the lobby. A reception will follow.

Hitchcock is a professor at the University of Wisconsin-Madison where he teaches screen printing, relief cut and installation art. His works on paper and multimedia installation consist of prints and moving image that mediate the trauma of war and the fragility of life. Images of U.S. military weaponry are combined with mythological hybrid creatures from the Wichita Mountains of western Oklahoma to explore notions of assimilation and control.

He also has served as artist-in-residence at the American Culture Center, Shanghai, China; Frans Masereel Centrum for Graphix in Kasterlee, Belgium; the Proyecto’ace International Center for Visual Arts in South America in Buenos Aires, Argentina; and the Venice Printmaking Studio, Venice, Italy. 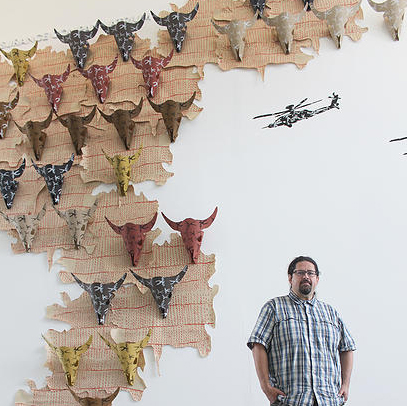