Five current and past Ripon College Latin students came together in an hour-long panel at the recent annual conference of the Wisconsin Association of Foreign Language Teachers to introduce and to guide audience discussion on “Trigger Warnings for Sex and Gore in Latin Literature.”

Trigger warnings for literature are classroom notices given in advance of texts that depict sexual abduction or battlefield carnage that might generate adverse reactions from students who have had such traumatic experiences in their personal pasts. Woven into this theme were issues of diversity both in the Latin classroom and in extra-curricular Latin clubs that cause awkwardness, controversy and confrontation.

At the awards ceremony of the conference, two Ripon students were recognized for their preparation and promise as Future Foreign Language Teachers.

Lydia Pomeroy ’17 of Hilbert, Wisconsin, in French, and Madeson Walgenback ’16 of Ripon, Wisconsin, in Spanish, were honored for academic potential already achieved and for their bright futures in language education.

Joshua LeGreve ’09 of Fond du Lac, Wisconsin, is finishing a two-year term as WAFLT president and will continue service on the WAFLT Board for an additional two years as past-president. At Ripon, he was a double major in Spanish and physics and now teaches Spanish for the Green Lake County schools.

Since 2002, five Ripon Classics students have made joint or individual presentations at WAFLT meetings; and three of those also read papers at regional classics conferences. 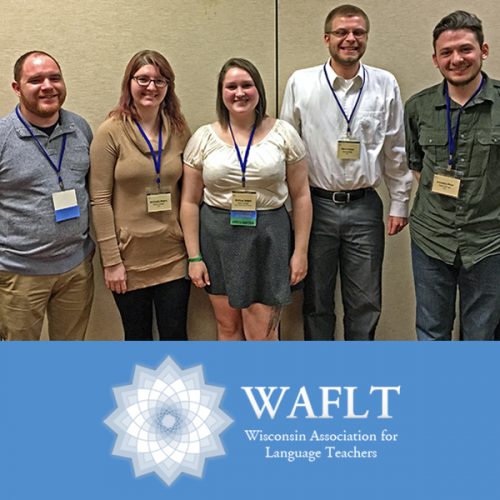