Ty Sabin is the greatest scorer in the 119-year history of the Ripon College men’s basketball program.

That statement, which once was simply an opinion, became an absolute fact on Dec. 2, 2016, at Monmouth College. On that day, Sabin, a senior guard from New Berlin, Wisconsin, scored his 1,872nd career point, breaking Ripon’s scoring record, which had been held by Scott Gillespie ’11.

“It’s an honor to be Ripon’s all-time leading scorer because the program has had so much tradition and success over the years,” Sabin says. “A lot of great players have come before me, but those players are even better people and have supported me since my first day on campus and continue to reach out to me about the team’s success.”

It is that type of family atmosphere that first drew Sabin, a two-time All-American and Midwest Conference Player of the Year, to Ripon College, where he is pursuing a degree in exercise science.

“There are so many good people at Ripon who genuinely care about each other,” Sabin says. “One of the many benefits of being at a small school is the close relationships that are formed, and I’ve made friendships that will last a lifetime.”

Breaking records is nothing new to Sabin, who also shattered Ripon’s single game scoring record earlier this season. In the Red Hawks’ 105-100 win against Loras, Sabin scored 53 points, breaking his own record of 51, which he set last year at Cornell. The amazing thing about his 53-point performance is that 45 came in the second half, which saw him make his final 12 shots, including five 3-pointers. It was the true definition of being “in the zone.”

“That is one of the best feelings a basketball player can have,” Sabin says. “Everything seems to click and I don’t think about anything —I just let my instincts take over.”

Those instincts have helped Sabin raise his game year after year. He currently leads the NCAA, across all divisions, in career scoring average with a school record 25 points per game, which is more than four points per game more than the next-highest average in school history. He’s averaging a career-best 29.8 points per game this season and has started all 90 games during his college career, scoring in double figures each time.

Those eye-popping numbers have put Ripon’s men’s basketball program in the national spotlight, as Sabin has been featured in Sports Illustrated and on CBS’ national college basketball show, along with feature stories in the Milwaukee Journal-Sentinel and on nearly every television station in Green Bay and Milwaukee. He also has been named Division-III National Player of the Week three times.

Experiencing success and handling it well are two different things, and Sabin has done both exceptionally well. The individual accolades are nice, but Sabin cares about one thing above all else.

“Winning is the only thing that matters to me, and that’s my number one goal as a member of the Ripon College basketball team,” Sabin says. “All the media attention is good for the College and brings some exposure to campus, but I’m never complacent because of success. It only drives me to work harder at becoming a better player.”

Sabin’s unparalleled drive to be the best has helped Ripon become one of the best teams in the Midwest Conference. The Red Hawks, who have qualified for the MWC Tournament in each of Sabin’s first three years, are in the midst of their best season in 15 years with a 14-4 record, which includes a win over then-#7 St. Norbert, snapping the Green Knights’ D-III record 72-game conference winning streak. Sabin is just the third player in MWC history to score more than 2,300 career points and is on pace to finish his career as the conference’s second-leading scorer.

“I always take each game one at a time, so I’ve never really thought about the number of points I’ve scored during my career. It’s a nice accomplishment that couldn’t have happened without my teammates,” Sabin says. “My career at Ripon hasn’t gone exactly how I expected because I always have such high expectations of both me and my teammates. I never put a ceiling on what I’m able to accomplish, which means I can accomplish anything if I work hard enough.” 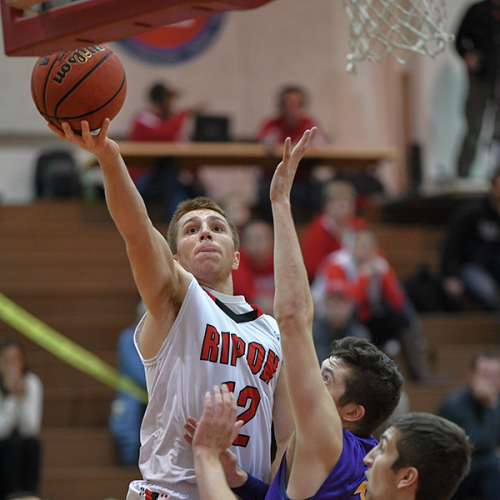