Shakespeare’s ‘Measure for Measure’ to be presented at Ripon College

William Shakespeare’s famous tragicomedy “Measure for Measure” will be presented by the Ripon College Depart of Theatre March 1-4. Performances will begin at 7:30 p.m. in Benstead Theatre, C.J. Rodman Center for the Arts, on the campus.

The Bard’s landmark tragicomedy of deception and sexual blackmail stretches from
the brothel to the prison to the city master’s chamber. The setting has been updated to the City State of Vienna during Prohibition in the early 1930s.

The story finds the Duke of Vienna relinquishing his power to Angelo so he can go incognito among the people disguised as a monk. Vienna has strict laws governing sexuality outside of wedlock — so strict that they have rarely, if ever, been enforced. Debauchery seems to have grown, but the well-loved duke did not want to enforce the stringent laws because violation could mean execution. So Angelo, an apparently stainless young man of sterling character, is appointed to cure the city of vice through the enforcement of the old laws.

Claudio and his fiancée Juliet are caught up in this police dragnet because she is pregnant out of wedlock: the ultimate proof of sexual involvement prior to marriage. Claudio has received a death sentence from Angelo. Claudio sends his friend Lucio to convince his sister Isabella to intercede with the “just but severe” Angelo. Isabella is about to take her vows as a nun, and it is not lost on Claudio that his sister, while being chaste and spiritually inclined, also is an attractive young woman.

Leading players are Brennan Kane ’17 of Ramsey, Minnesota, as the Duke; James Balistreri ’19 of Plymouth, Wisconsin, as Angelo; Mike Baumhardt ’18 of Richfield, Wisconsin, as Claudio; Savannah White ’19 of Carol Stream, Illinois, as Juliet; DeShawn Thomas ’20 of Milwaukee, Wisconsin, as Lucio; and Sophie Widman ’18 of Boulder Creek, California, as Isabella.

He said that when he selected play last March, he had no idea that the power imbalances featured in the play would have such relevance to the suddenly changed political landscape in the United States. In Shakespeare’s play, sexuality serves as a metaphor for different forces at work in society: class oppression, national pride, individual freedom and the recognition of the need for governing laws that are just and fair.

“In the final analysis,” Amsden said, “the play is so thought-proving, lifelike and well-constructed that I have to agree with a famous critic of the play who said it is was, indeed, ‘written by a genius.’ ”
Tickets are free but reservations are recommended by calling 920-748-8791 or emailing Barb Mitchell at [email protected] The play presentation and content are appropriate for most middle-school aged students and up. 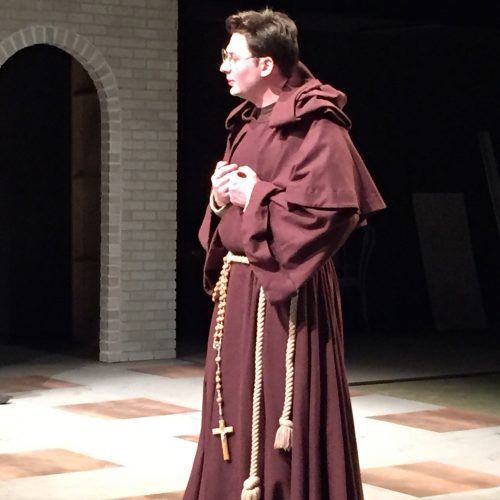