The work of Madison artist Jeremy Wineberg will be on view March 31 through May 5 at Ripon College. The exhibit, “Nowhere Dreams,” will be shown in Caestecker Gallery, C.J. Rodman Center for the Arts.

An artist’s talk will be held at 7 p.m. March 31 in the Rodman Center lobby. A reception will follow in the gallery.

Wineberg is a designer, educator and visual artist working in painting, drawing, sculpture, video and installation. His work has been exhibited across the United States and has recently dealt with mapping, synesthesia, psychogeography, chaos and gravity.

“I am interested in patterns of growth,” Wineberg says about his work. “I like to play. I play with process and self-generating patterns, often moving ideas from one media to another, modeling the play on natural and cultural phenomena that have made an impression on me: tree rings, biological dissections, wind-carved canyons, stalactites and stalagmites, cloud formations, water currents and other kinds of turbulence, maps, bubble chambers, scientific diagrams, measurements of cosmic background radiation.

“I want to make connections between everyday life and events beyond daily experience, infusing the microscopic and the cosmic back into the ordinary, estranging it and opening it up to new points of view, maintaining a sense of playfulness that speaks to our creatively chaotic cosmic origins.”

Wineberg has worked collaboratively with engineers, performance artists, musicians, chefs and other visual artists. He has received several grants for public and collaborative work, including Inverted Lakes in 2007 and the Little Galleries, with artist and co-curator Rachel Bruya, in 2013. His work has been reproduced in New American Paintings and recently shown in Madison Wisconsin, Denver Colorado, Philadelphia Pennsylvania, Marion, Ohio, Nashville, Tennessee, and the Katonah Museum in New York.

Wineberg grew up in Pennsylvania and studied art at the University of Delaware. He lives in Madison, Wisconsin, where he also co-curates Little Galleries and is a contributing writers to the art blog Spackle Madison. 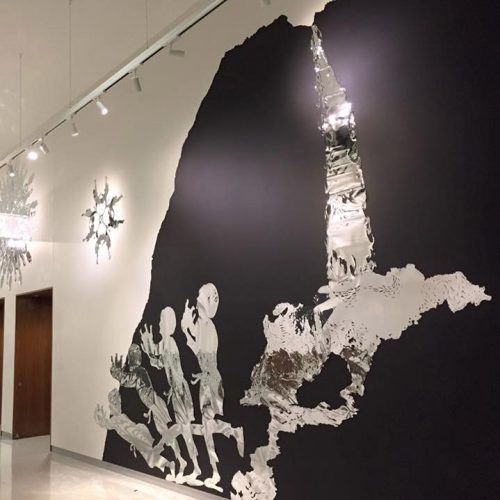