“I kind of teared up when I got the email with the acceptance. It was really emotional, and I felt really grateful for the whole Communication department,” says Mra Than ’17, who recently presented at the 43rd annual DePauw University’s National Undergraduate Honors Conference. “It made me realize I made the right decision by coming to Ripon. All the stress and hard work I’ve gone through was worth it.”

The DePauw Honors conference allows students studying communications to present and learn from one another, as well as from attending scholars. The conference is very exclusive, selecting only up 30 papers from students across the nation. Despite this, Ripon has a history with the conference. For 16 consecutive years, at least one presenter has been chosen from Ripon, but often two or more. This year, both Than and Maddie VandenHouten presented at the conference.

“It was an incredible honor to be selected to present and gain insight from rhetorical scholars around the country,” said VandenHouten. “I give credit to my communication professors for encouraging us to perfect our papers and never settle.”

Their papers were written for Associate Professor Steve Martin’s Rhetorical Criticisms course. From the beginning, Martin pushed students to write the best papers possible for a chance to present. Their papers involved researching an article of media, and analyzing the rhetoric behind it.

VandenHouten’s paper, “The Man Behind the Persona: Bill Cosby was Never America’s Dad,” analyzed the interviews that took place about Cosby from October 2014 to December 2015. “I was particularly concerned with the strategies used to defend him in 2014 when his sexual assault allegations resurfaced,” VandenHouten says. “I analyzed the case from three perspectives: Bill Cosby, his public relations team, and his surrogates.”

VandenHouten argued that Cosby’s defenders falsely conflated his television personality with who he was off-screen to bolster his perception. Cosby himself took a different approach, ignoring questions altogether or responding with “incoherent rambling.” “According to the rhetorical scholarship surrounding crisis communication, this strategy has never been documented before,” VandenHouten says. “I concluded that Cosby used a ‘strategy of avoidance and confusion’ in an effort to defend himself.”

Than’s paper, “Bodies in Protest — Free the Nipple’s Fights for Gender Equality,” analyzed the protest strategies of the activist group Free the Nipple as depicted in the documentary created by the group’s founder, Lina Esco.

Than argued that the group’s strategy — called Body Rhetoric — had a lot of impact. “I found out that by choosing to be topless in public, they’re taking back their bodily agency and advocating for a nonsexual image of breasts so breastfeeding can be normalized in society,” she says. “They’re also arguing for gender equality, to have the same rights men do in regards to how they are viewed in public.”

For both students, the experience was a great honor and memorable opportunity. “Presenting it at the conference was really exciting and fun because everybody knew rhetorical theories and had a vested interest in communication,” Than says.

“I loved presenting my project,” VandenHouten says. “I enjoyed the opportunity for the audience to ask me questions, want to hear more, and challenge me in some regards. It was a very unique experience, one that I do not take for granted.”

(Photo: Mra Than, left, and Maddie VandenHouten, right, with a representative of DePauw University) 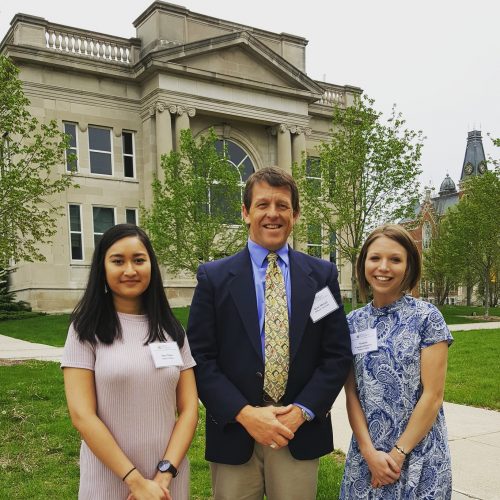