Ripon College honored eight of its alumni at the annual dinner and awards presentation June 23, sponsored by the Alumni Association.

She is a former board member and former chair of the Council on Culture and Arts, and a member of the Healthy Start Coalition in Tallahassee, Florida. Her honors include the Allen Morris Award for Most Effective in Committee 1988-1990; and induction into the Broward County Women’s Hall of Fame.

At Ripon College, Anne was co-editor of The Crimson; a member of Alpha Xi Delta and president of Kappa Theta (formerly Alpha Xi Delta); secretary of Student Senate; a participant in the Urban Studies Program; and she co-hosted a radio show on WRPN. She is a native of Eau Claire, Wisconsin.

Porubcansky, of Marine on Saint Croix, Minnesota, is retired as the foreign editor of the Los Angeles Times newspaper. While there, he oversaw a team of correspondents on five continents, shaped coverage of major news events, and edited projects that won major U.S. journalism prizes. In an 11-year career as a foreign correspondent for The Associated Press, he was based in Moscow, Vienna and Hong Kong.

Following his retirement, he has contributed to MinnPost, an online news site based in the Minneapolis-St. Paul area. He is currently a senior editor at Round Earth Media and a member of the Committee on Foreign Relations—Minnesota.

At Ripon College, Porubcansky majored in politics and government, and philosophy. He was editor of College Days and a member of Phi Beta Kappa.

He is a native of Manitowoc, Wisconsin.

Rydz, of Sheboygan Falls, Wisconsin, is an endocrine sales specialist with AstraZeneca Pharmaceutical LLP. He previously was a representative for Eli Lilly and Co. His sales focus has been on primary care physicians, mid-levels, diabetes educators, pharmacists, and endocrinologists. He is a native of Kohler, Wisconsin.

At Ripon College, he majored in chemistry and religion; was a member of Sigma Chi fraternity, the Reduced Gravity Student Flight Program and the Ethical Leadership Program; and he participated in the Sea Education Association.

In the community, he has served as a fund raiser and advocate for water.org, an international, nonprofit organization that seeks to address the global water crisis and bring safe water and sanitation to people around the world.

Uyhelji, of Oklahoma City, Oklahoma, is a supervisory research geneticist with the Federal Aviation Administration. She received a Ph.D. in biology from the Georgia Institute of Technology and previously was a postdoctoral research associate at the University of Notre Dame.

At Ripon College, she participated in forensics; two Maymester programs, Oceanography and Ecology of the Boreal Forest; was an undergraduate laboratory assistant in the biology department; a mentor for Communicating Plus; and a research intern at Miami University of Oxford, Ohio. At Notre Dame, she led and designed workshops to expose middle school girls to the STEM fields.  At Georgia Tech, she guided freshmen undergraduate teams in service-learning projects and studies of wetlands. She is a member of the honor societies Tri Beta and Phi Beta Kappa; and AAAS, a scientific society; and has 17 publications.

Kohl is a native of Muskego, Wisconsin, but currently lives in Waukesha. He is a vice president at WBD Inc.

Massen was a two-time All-Region and two-time First Team All-Conference selection for the Ripon women’s basketball team, helping the program win back-to-back Midwest Conference Championships in 2004 and 2005. The MWC Player of the Year in 2006, Massen finished that season leading all NCAA Division-III players in field-goal percentage (.652), en route to All-American Honorable Mention and Academic All-America First Team honors, while also being selected as a Josten’s Trophy Finalist. At the time of her graduation, Karalyn ranked second in school history for career points, (1,278), second in blocked shots (75), and sixth in rebounds (596), while holding single-season school records for points, scoring average and rebounds.

Massen lives in her native Beaver Dam, Wisconsin, where she is a school psychologist with the Beaver Dam Unified School District.

Reichhart was a two-sport star at Ripon, competing in softball and volleyball. One of the best hitters in Ripon softball history, Rose was a three-time First Team All-Conference selection, setting school records for career batting average (.437), hits (162), RBI (99) and home runs (20), while finishing second in triples (14), third in runs scored (102) and ninth in stolen bases (20). She was named First Team All-Region and Third Team All-American as a sophomore in 2004 when she set single-season school records for batting average (.509), hits (56), RBI (37) and runs scored (41). As a volleyball player, Rose recorded 66 kills, 430 digs, 33 blocks, 27 aces and 36 assists during her four-year career.

Reichhart is a native of Cedarburg, Wisconsin, and currently resides in New Berlin where she is a kickboxing instructor with ilovekickboxing.com and a pharmacy technician with Prescriptions Plus.

Rhoads is Ripon’s version of The Iron Man, playing every inning of every game during his four years with the Ripon baseball team. A member of three consecutive Midwest Conference Championship teams (1998-00), Rhoads is a four-time First Team All-Conference selection, becoming the first freshman in conference history to win MWC Player of the Year honors, doing so in 1997. Rhoads graduated as Ripon’s career leader in batting average (.387), hits (218), runs (166), doubles (54), triples (12), home runs (19), RBI (138), total bases (353) and stolen bases (52).

Rhoads lives in Sullivan, Wisconsin. He is a Senior Applications Architect with Paragon Development Solutions. He is a native of Oconomowoc, Wisconsin. 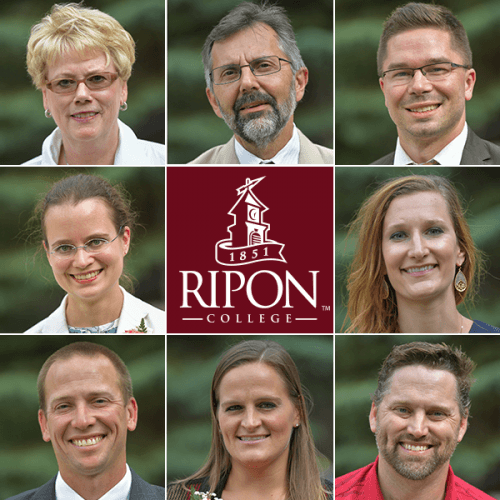