The annual banding of young osprey in Green Lake was completed Monday for the fourth summer in a row by Memuna Khan, associate professor of biology and chair of the biology department.

The project began in 2014 when Khan was asked by the Green Lake Association to track the patterns and habits of these birds so information about this species could be used for public education as well as public outreach. The Green Team and the Green Lake Nature Club, in collaboration with Khan, contributed.

Khan takes part in banding birds only from this specific nest in Green Lake, however there are other banders in the state. “The more banders that we have in the state, the more information we have about the birds, their movements and their survival,” Khan says. This year, Khan banded three young female osprey, approximately 6 weeks of age, from the nest in Green Lake.

When a banded bird dies — provided that someone finds the bird and reports it to the website or phone number on the band — Khan is able to know where the bird died and perhaps the environmental influences that could have led to the bird’s death. This information helps determine the patterns of the species as well as how they are influenced by their environment.

There is also a chance to see these birds returning to the location to breed in the future. So if a bird is spotted at one of the several nesting locations in the area and recognized as one of the birds banded by Khan and the Green Lake Nature Club, there is a potential for the gathering of more information about the trends of this bird species.

Khan acknowledges that the reports of these birds are far and few between. “It’s putting a message in a bottle,” but the purpose of keeping this project alive is to be able to track trends, give the community a chance to take part as spectators for educational purposes, and to challenge spectators to think about environmental influences on these birds and how those influences such as clean water and land conservation affect the world around us.

“If we can influence just one person to think about these things, or even to take action on these environmental issues in any way, we’ve won,” Khan says. 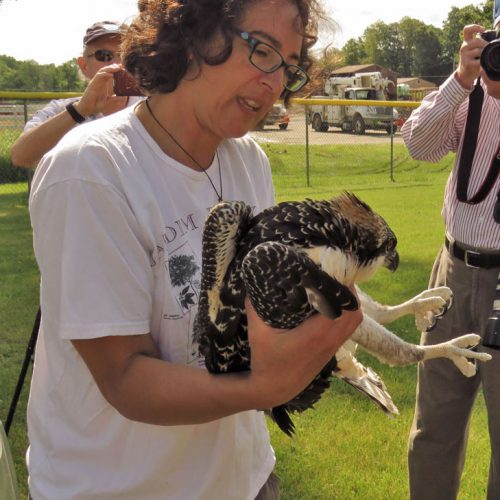