Maggie Hall ’08 of Indianapolis, Indiana, fell in love with sound when she heard a special scream. “My parents took my brother and I to see a show called ‘The Woman in Black.’ It’s basically a ghost story,” Hall says. “My brother and I were young, 10 and 8, or thereabout. There is a moment in the show where there is a huge scream. That scream scared my brother so badly that he was shaking the entire ride home, and me, being the big sister, thought, ‘If something can scare my brother that badly, I need to learn how to do that!’ That is when I first started to become interested in sound in general.”

At Ripon College, Hall majored in theatre, and her interest in sound thrived. Professor of Theatre Ken Hill encouraged Hall to explore her interest and gave her many opportunities to run the soundboard for theatre productions. “From there, I went to grad school at the University of North Carolina School of the Arts, where I got my MFA in sound design,” she says. After graduating, she began working at the Indiana Repertory Theater and eventually became the theater’s lead sound designer.

For the past four years, Hall has worked at the Indiana Repertory Theater, and uses sound to enhance every production. “My primary job as a sound engineer no matter what kind of sound I am doing, whether it is for a play or a musical, is to aid the designer in accomplishing their vision for a show,” she explains.

During the summers, she works at Flat Rock Playhouse in North Carolina.

Each play has different demands that bring new challenges, Hall says. “On some shows, the challenge is where you can hide speakers on a set and how are you going to make a phone ring on cue; and on other shows, it’s 31 people in wireless microphones and a 10-piece band.”

Hall’s job involves maintaining equipment and placing equipment during any given show. Speakers, microphones and projectors all fall under the IRT sound department’s responsibilities.

For Hall, musicals bring the most interesting challenges. Currently, she is working at Flat Rock Playhouse, and they are preparing for showings of “Annie” and “Joseph and The Amazing Technicolor Dreamcoat.”

“I enjoy the challenge of having to critically listen to every performance, as (there is a) bond that gets built between the preformed and the mix engineer. I usually think of it as I am preforming along with everyone else on stage. Not all kinds of sound are that engaging.” 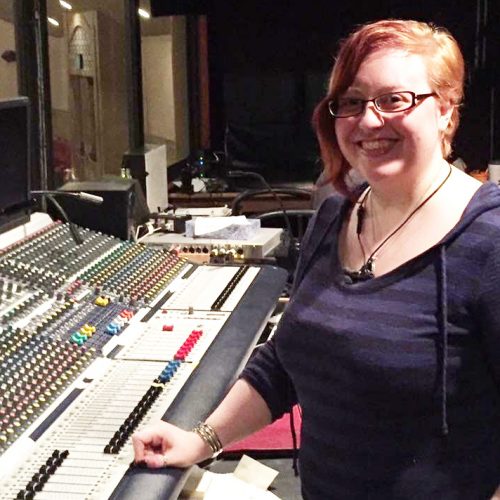