Her summer work researching facial expressions will be a step toward her goal for Olivia Heck ’19 of Waukesha, Wisconsin. Heck aspires to be a behavioral psychologist or to work in some area of social psychology.

“I have been researching how the effects of gender, race and facial expression influence the perceptions of target faces,” Heck says. “I’m looking at the three main effects as well as the interaction between them to see if there are any significant differences among responses toward visual stimuli.”

This summer project is part of Heck’s participation in the McNair Scholars Program. She is working under the supervision of Kristine Kovack-Lesh, associate professor of psychology. “I chose Kovack-Lesh because I have taken three of her classes,” Heck says. “I work in the Infant Cognition Lab during the school year, and she is also my academic advisor during the school year. She knows how I am as a student, and I know her teaching style, so having her as a mentor during the summer just feels like I’m taking another one of her classes.”

Heck is one of four students Kovack-Lesh has been working with this summer. She also is mentoring another McNair scholar as well as overseeing students in the Infant Cognition Lab.

“It was more than I was thinking I was going to have,” Kovack-Lesh says. “It can be a lot, but everyone is doing their part.”

Heck says that despite how quiet the summer can be on campus, she is loving doing research. “I chose to spend my summer on campus doing research because it gave me the ability to gain more experience doing psychology research that will look good on graduate school applications,” Heck says. “Doing research here also gives me a lot of freedom regarding my topic of interest.”

Kovack-Lesh points out that researching during the summer allows students the opportunity to have more impactful research. She notes that Heck has been able to work a sample size of more than 300 people outside of the Ripon community. This is a sample she would not have been able to obtain during the school year.

Heck says she has learned a lot from this experience, but she is looking forward to her friends being back on campus in the fall. 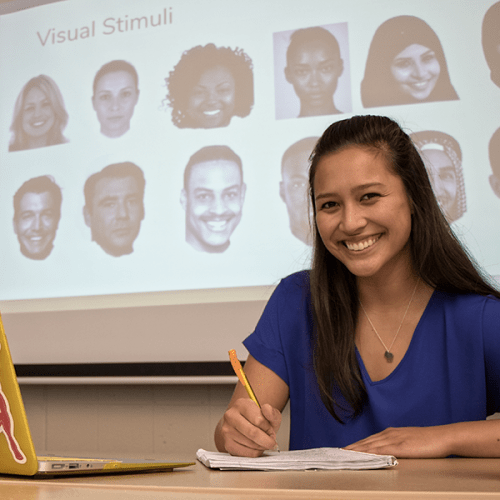