Students use math to research real-life problem on Green Lake

One year ago, Associate Professor of Mathematical Sciences Andrea Young was approached to solve a problem. Stephanie Prellwitz, executive director of the Green Lake Association, wanted to find a way to preserve and promote the health of Green Lake. This summer, two students, Mitra Kermani ’20 and Antony Gradillas ’19, have been researching how to mathematically model the common carp population in Green Lake.

“This is a really topical topic because there is a lot of energy and effort in controlling the environment in Green Lake,” says Young. She explains that carp currently are eating the vegetation in the estuaries that flow into Green Lake. “Carp destroy vegetation when they spawn,” Young says. “They ruin the bottoms of the lake, and it kills vegetation.” The lack of vegetation means little to no filtration system between Green Lake and the bodies of water that empty into it, she adds.

Kermani and Grandillas have been researching a strategy for handling the carp populating. The two students have been using math modeling to predict levels of carp in Green Lake. “Our goal was to determine the best harvesting rate of the carp to preserve the health of the lake,” says Grandillas.

The results of the trio’s research found that removing part of the carp population is not a sustainable strategy.“Based on our math model, it looks like we could not come up with a sustainable level of harvest that would sustain a healthy level of carp in a healthy zone,” says Young.

But it’s not bad news. Young says she wants to continue doing this research alongside the Green Lake Association and the Wisconsin Department of Natural Resources. She hopes they can find a better strategy for maintaining the health of Green Lake.

Kermani and Grandillas also want to continue researching this topic. Both presented their project to the Green Lake Association and at the National Math Conference in Chicago, Illinois.

“I think both Antony and I found the project interesting since it is a local problem and we are both from out-of-state,” Kermani says. “It also was fun that our research was directly impacting Green Lake, the Green Lake Association and their partners.”

Young adds that projects such as these are important: “It’s cool to see the work we are doing is of real interest to real people right now,” she says. “Often we think of math as this abstract concept that not many people get to think about.”

Working with students on research is on of Young’s passions. She chose to work with Kermani and Grandillas because of their interest in math and willingness to learn.

“Before this summer, I didn’t know a thing about carp and neither did Mitra or Antony. The three of us were going in blind,” Young says. “We learned a lot. That’s the other part of it for me. I really like feeling like the students are my teammates instead of me being the boss or the expert.” 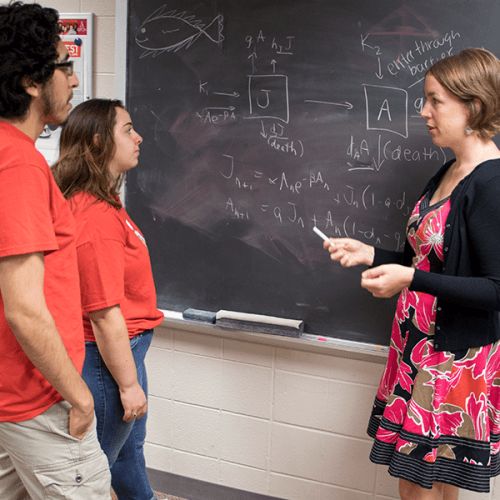