Lon Michels ’84 and his partner, Todd Olson, of Lodi, Wisconsin, will have a showing of their artwork Sept. 15 to Nov. 10 in the Portrait Society Gallery, 207 E. Buffalo St., fifth floor, in Milwaukee Wisconsin. Gallery hours are noon to 5 p.m. Thursday through Saturday.

Michels began painting as a child under the tutelage of his mother, who was an artist. After many years in New York as Louise Nevelson’s studio assistant and a model for Calvin Klein, Michels found his way back to Wisconsin with Olson.

About nine years ago, Olson also began painting. Because Michels wanted him to have something to do while he was in the studio, the most logical solution was to teach Olson to paint. Olson’s work has flourished with a similar but distinctive style. Both compose paintings with detailed, vibrant patterns, which, they say, allude to the positive human and spiritual energy they seek in daily life, having both endured health crises and other challenges in their pasts.

Included are a suite of paintings done while they were in Ecuador last winter, several recent portraits and paintings based on vistas in Lodi.

Michels’ work is in many prominent collections. 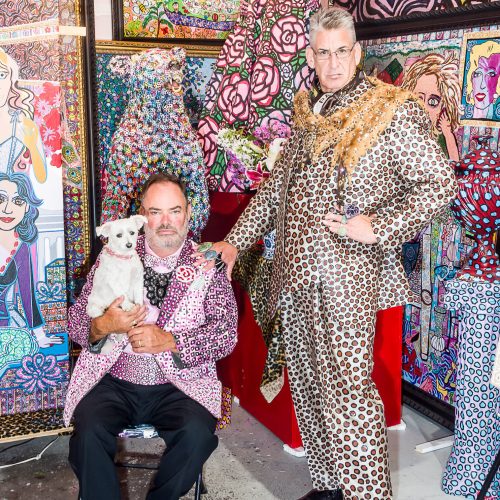