“We were egomaniacs with no self-esteem — that’s what made it dangerous,” ex-skinhead Frank Meeink explained in a recent talk at Ripon College. Meeink told the story of his descent into the neo-Nazi movement and what brought him out of hatred. Meeink was introduced by Professor of Communication Jody Roy. Roy assisted Meeink in writing his memoir, Autobiography of a Recovering Skinhead.

Originally published in 2010, a 2017 expanded edition of Autobiography of a Recovering Skinhead is available in bookstores nationwide. Roy explains that the second edition includes nine new chapters covering more recent events in Frank’s life and also his thoughts on various types of hateful arguments that boiled up during the 2016 presidential campaign.

Meeink’s childhood was violent and difficult. His mother struggled with drug addiction, and his stepfather brutally abused him. Meeink grew up living in fear and feeling like an outcast. He eventually was thrown out of his home and briefly lived with his father, a long-time street tough with his own addiction issues, in a dangerous part of the city. Meeink’s view of minorities was tinged by the violence he witnessed at his predominantly black school.

At 13, Meeink spent the summer visiting his cousin in the country. His cousin and his friends all had joined the neo-Nazi movement. Meeink got to know them, and they offered him something no one else had — safety and friendship. Eventually, Meeink was attending meetings and causing trouble with his new friends. After his first fight, Meeink found something else he had never had before — power.

He recalled the first person he threatened, and how it felt to be the aggressor. “I felt cool, and I felt safe. He feared me, and I loved it,” he explained. “My whole life, I’d feared everything. I loved when someone feared me.”

From there. Meeink was pulled further into the movement. By 16, he was recruiting people in the region, living under a fake name and hiding from the police. His life was full of violence and turmoil, but for many years other neo-Nazis were the only friends he had.

In his presentation, Meeink discussed the thought process behind many white supremacists, and the tactics he used to recruit others into hatred. “Racism is the greatest bait-and-switch pulled in history,” he explained. “We say, ‘Come be proud of your heritage!’ But we never talk about our heritage — we talk about their heritage.”

Meeink eventually was imprisoned for aggravated kidnapping. In prison, he was forced to confront people he had been taught to hate. Through sports, Meeink slowly bonded with prisoners of other races. Eventually, they were closer to him than his fellow neo-Nazis. Sports played a key role in Meeink letting go of pretenses because there was no room for hatred in games of cooperation. As he said, “Sports are the greatest equalizer.”

After he was released, Meeink still struggled with racist feelings. “My brain wasn’t cured of racism immediately,” he explained. It was difficult to find work with a criminal record, but eventually he was employed by a Jewish antique dealer. At first Meeink had many anti-semitic assumptions about his employer, but the man only responded to Meeink with patience and compassion. This was the breaking point for Meeink’s hatred, he said.

Now more than 20 years since Meeink left the neo-Nazi movement, he frequently speaks out against it. In his everyday life, he is a hockey coach and enjoys teaching children how to cooperate and work as a team.

In these times of turmoil, Meeink argues that the best way to fight hatred is also the most difficult way — by offering empathy and forgiveness. Many white supremacists, he argues, are people who feel hurt and unloved and want to hurt others as a result. They come expecting violence, but only compassion can change them.

In his closing statement, Meeink encouraged listeners to fight hatred with understanding. “We have to use empathy as a weapon for good,” he said. “The day that people treated me as a human being — I couldn’t fight that.” 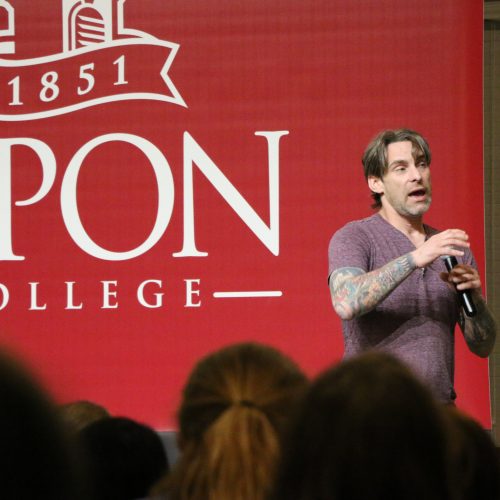