On the morning of Jan. 3, we grabbed our packs and prepared for a day in the Monteverde Cloud Forest Reserve, which is home to 2.5 percent of the world’s species. At the entrance to the trail a surprise awaited, a flurry of hummingbirds, including Violet Sabrewings, Coppery Headed Emeralds, Green Crowned Brilliants and many others.

After we entered the hiking trail, we were told of a creature on a tree. We could not see it until another guide pointed it out through his tripod scope. A blue-eyed anole perfectly camouflaged from the naked eye. From there we began our journey up to the continental divide through the cloud forest. Along the way we witnessed a variety of birds like the Azure Hooded Jay, Orange Bellied Trogon and Black-Faced Solitaire. Our guide, Alexa, gave us an in-depth educational experience which showed us the true limitlessness of what you can know of earth’s creatures and critters.

After a few hours, we finally reached the continental divide. At the precipice of the mountain we looked to left to see the Caribbean trade winds form a cloud that rolled over the divide presenting us with a calm and cool miss that seemed to make time stop. Each side of the mountain we could see nothing but clouds. One could say we were on literally on “cloud 9.”

We reluctantly returned down the mountain. Just as we exited the trail, our guide asked asked, “Do you guys want to see something fluffy?” We hiked back up the trail to find, high in the trees, a Two-Toed Sloth having an evening snack.

Later that night, we were provided an educational experience in the black of night, a bat mist netting demonstration. About a dozen bats were captured that night. The bats were placed in cloth bags, and we were able to examine the different types of bats, their physical characteristics and behaviors. We saw two species of fruit-eating bats, one species of insect-eating bats, and the well-known vampire bat.

Due to climate changes, bat populations in Monteverde are greatly decreasing. Bat species, specifically vampire bats, are moving higher in altitude and in latitude towards Northern Mexico and the Southern United States. This movement is detrimental to native bat species in those areas, as the increased population of vampire bats creates additional animosity for human-bat relations.

The following day included a trip to the organic coffee farm, Finca LaBella. To our excitement, as soon as we arrived we saw a White-Faced Capuchin in the trees just five feet above our heads.

We learned about the process of making coffee and the troubles organic farms go through to yield crops while still remaining organic. A couple of farming methods that stood out were the planting of other fruit bearing trees around the coffee trees and the spraying molasses to deter insects and other pests.

We also learned that the sugar cane farm is not intended to profit, but exists solely for the enjoyment of the community. Some students had the opportunity to receive a firsthand experience processing sugar cane. At the end of our tour, we were able to sample sugar cane, sugar cane juice and homemade candy made from the organic sugar cane grown on the farm.

After the tour, we went up the road where we learned what happens to the coffee beans after harvest. To our surprise there is a very specific, long and arduous process before the beans are ready for the coffee maker. We learned the process of making organic coffee, as well as the differences between medium and dark roast. Dark roast coffee has a richer flavor with less caffeine, and medium roast has less flavor but higher caffeine content. This small, family farm is a great example of organic practices that pave the way for agricultural sustainability. 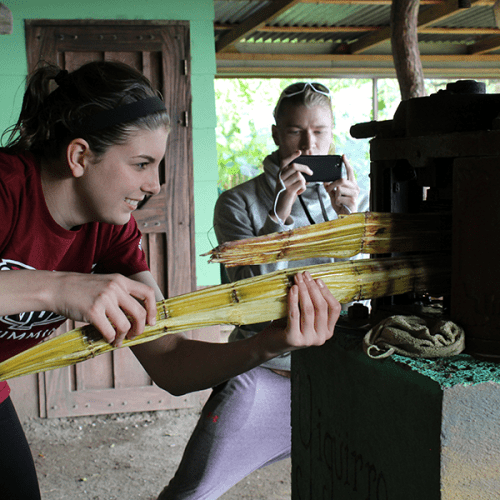