“From my research, I found that avoiding gerrymandering isn’t as simple as drawing straight lines in a state to make compactly shaped districts,” says Briana Bartz ’20 of Brandon, Wisconsin, about her summer research with Associate Professor of Mathematical Sciences McKenzie Lamb. Last summer, the two researched gerrymandering, the act of politicians redrawing their state’s constituent districts to give themselves an unwarranted advantage in future elections.

“Dr. Lamb approached me last semester and told me he was conducting research that upcoming summer on gerrymandering in an attempt to find a way to avoid gerrymandering, asking if I would join him,” Bartz says. “I agreed, as I had studied gerrymandering briefly in high school and had always wondered about the possibilities of fairness.”

After reviewing literature on the subject, Bartz and Lamb chose to evaluate a gerrymandering test proposed by neuroscientist Samuel Wang. Wang’s test proposes comparing districts of a state to an equal number of very similar districts across the country. The number of seats won in the similar districts is averaged, and if the number of seats in the state being investigated is the same, it supposedly has not been gerrymandered.

However, because Wang’s test compares a state to the rest of the country, the test makes fairness relative. “That’s a problem, because very good gerrymandering software was introduced in 2010,” Lamb says. “Many states have been gerrymandered since then.”

Lamb and Bartz wanted to see whether Wang’s test would pick up on gerrymandering when other states had been gerrymandered as well. To do this, Bartz and other student researchers, including Ngan Tran ’17 of Chicago, Illinois, programmed a simulated country.

This allowed Bartz to learn coding, an important skill for upcoming math graduates. “Through my five weeks of research, I learned how to use the Python computer programming system; learning computer programming was the most difficult part of my project and the part I am most proud of,” Bartz says.

In the simulation, votes were randomly generated. To begin with, Democrats won 35 of their 64 available seats. Slowly, the simulation gerrymandered more states in favor of Republicans, bringing the number of Democrats’ seats down to 28, then to 21. At different stages, Wang’s test was applied to see if gerrymandering was detected. Not only did Wang’s test not detect the gerrymandering, it concluded that states were better instead of worse.

While Bartz, Tran and Lamb found evidence that Wang’s test was problematic, further research into how to detect and prevent gerrymandering will have to be conducted. However, this research allowed Tran and Bartz to learn critical skills for their careers, as well as work alongside their professor. 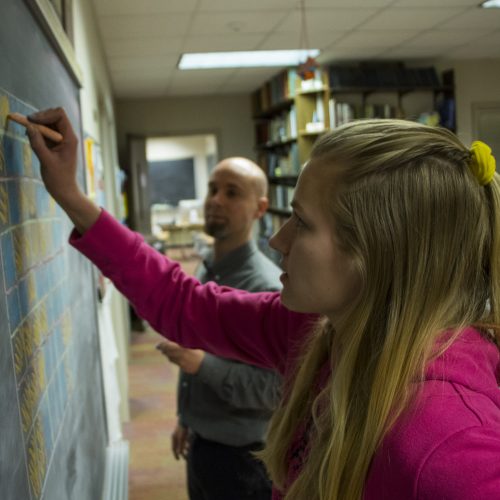