Slave trade in Libya today to be discussed Feb. 26 by Jean-Blaise Samou

“Slave Trade in Libya Today: Implications for U.S. Foreign Policy” will be discussed Feb. 26 at Ripon College by Dr. Jean-Blaise Samou, assistant professor of French. The talk, presented by the Center for Politics and the People, will begin at 4:30 p.m. in the Kresge Little Theatre, East Hall, on the campus. All are welcome to attend.

After CNN’s reports on Nov. 13, 2017, “Migrants Being Sold as Slaves in Libya,” a wave of shock was felt around the world as many people and organizations rose spontaneously with protest and propositions for help. However, slave auctions in Libya are only the tip of the iceberg. The worldwide emotional response may never suffice to end the sub-Saharan migrants’ plight, which now is known to have spread into the Arab world and beyond, from Morocco to as far as Indonesia and Argentina.

Samou’s talk will explore the current migrants’ tragedy in the Mediterranean from a postcolonial, transnational, and trans-historical perspective.

His research focuses on postcolonial theory, postcolonial France and the Françafrique, fictional historiographies, and the construction of national identities in Africa. 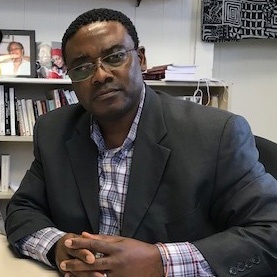