Professor of Religion Brian Smith presented a paper, “What Does the Bible Say about LGBTQ?” at the Midwest American Academy of Religion’s annual conference, March 2-4, 2018, at Ball State University in Muncie, Indiana.

The Midwest American Academy of Religion (MAAR) is the professional association of religious studies professors in the Midwest. Each year, about 125 scholars and students attend the conference.

Interested students submit abstracts and share research with MAAR for approval. “Every year, Ripon student presenters at MAAR have told me after the experience that it was a very rewarding event in their academic lives and they were happy they did it,” Smith says. “Sometimes, if it is a junior the student comes back a second time as a senior to make a different presentation.”

Frisque’s paper topic, “Was The Korean War Just? An Application of Just War Principles,” was chosen out of her love for the television show M*A*S*H and the interesting aspect that just war theory allows. She says that before doing research, she had little knowledge of the Korean war and wanted to deepen her understanding. On the panel during which she presented, she was the only undergraduate student. “I gained confidence in myself and my research and presentation abilities as well as another idea for a research topic,” Frisque says. “Overall, it was an amazing experience where other scholars supported each other and gave amazing constructive criticisms.”

Krause’s paper, “Late Antiquity and the Early Christian Poet Prudentius,” analyzed the First Christian Latin Poet, Prudentius. Prudentius “has all these superlatives, wrote an immense amount of material, and is basically unknown and unwritten about in the fields of Classics and Early Christianity,” Krause says. He began his research over the summer, and Smith thought the topic would mesh well with other research being presented at the conference.

“Each of the students this year made articulate presentations at MAAR, and their ideas were well-received by their respective panel chairs,” Smith says. “There was also some conversation among the panelists after the presentations and in each case the Ripon students held their own or asked good questions of the other panelists. They engaged in scholarly dialogue as if they were graduate students or even professors.

“In my seven years of bringing Ripon students to present at the MAAR, I have always observed that they make polished speeches, and this year was no different. Their liberal arts training suits them well to write coherent papers and to speak publicly in cogent articulate fashion.” 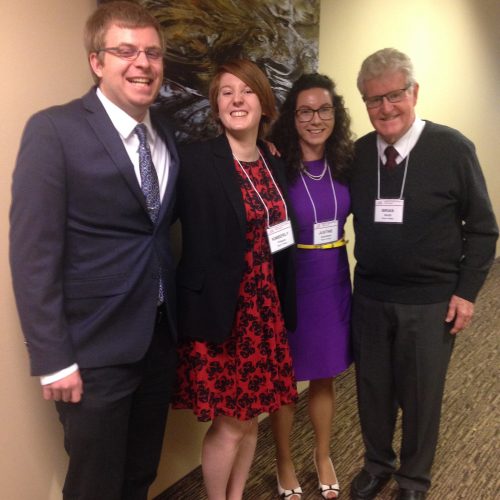