Two riders with the student-organized Equestrian Team at Ripon College have qualified for regional competition, which will be held in April. Morgan Hoffmann ’20 of Waupun, Wisconsin, and president Katherine “Katie” Fleming ’18 of Appleton, Wisconsin, are qualifiers, but may not be able to attend because of scheduling conflicts during the competition in Missouri.

Other members of this season’s team are Elena Byrd ’21 of Naperville, Illinois; Genevieve Hanna ’21 of Waukesha, Wisconsin; Jeneva Lindsey ’21 of Juneau, Wisconsin; Grace Sullivan ’20 of Oshkosh, Wisconsin; and McKala Kiessling ’16 of Ripon, Wisconsin, an alumni rider.

Equestrian Team practices the English hunter seat style, the most traditional style of horseback riding and the foundation for jumping over fences. Competitions are held in September, October and during the spring semester.

For the spring semester, practices began in mid-February and will end in early April. Practices are held at Greenhaven Farm in Fond du Lac, and all the horses are owned by Coach Melissa Bradley.

The team participates in the Intercollegiate Horse Show Association (IHSA). A unique aspect of the competition is that riders have to ride on horses that they did not practice with. Students are judged individually on their skills and ability to adapt to a new horse. Points go toward the team.

The Ripon team has competed against schools like Augustana College, Northwestern University, UW-Madison, Iowa State and more. Riders have competed in regionals, zone finals, and the national championship. Postseason rankings are given to schools points based on points collected by individual riders throughout the seasons. For 2016-2017, the Ripon College Equestrian Team was ranked the highest team in their region. To check out their riding go to: https://www.youtube.com/watch?v=6TJ0i_Xbmtg.

The team was started in 2010, and all students are welcome to join regardless of their horseback riding skills. There is a beginners’ level, and students do not need to own their own horse. New riders can attend tryouts at the beginning of the fall semester, and coaches will evaluate them based on current riding abilities to be given a placement level.

The goal of the club is to have fun, Fleming says, and that the most important thing is that the riders want to do their best and learn from the opportunity. 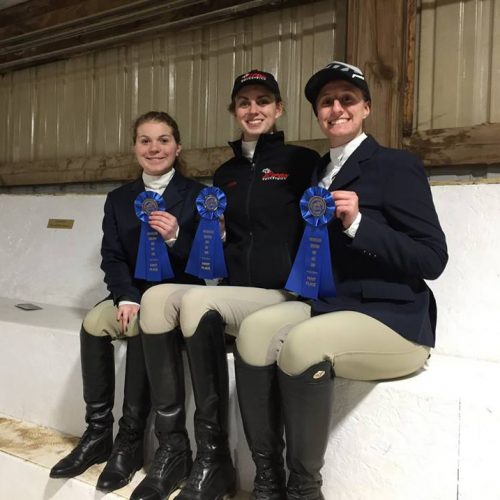