Speaking for the first time about her experience as a woman living with Tourette Syndrome (Tourette’s), Amber Beres ’97 of Indianapolis, Indiana, took the stage last fall to speak for the Sparks organization, a membership-based group dedicated to providing “new ways of thinking in the areas of personal and business development, marketing, technology, motivation and inspiration.”

She loved the experience. “The room was full and I was very nervous, but it was very freeing to open up to strangers about my experience,” Beres says. “There was an instant bond of vulnerability and realness.”

Tourette’s is a neurobehavioral condition. The Centers for Disease Control and Prevention (CDC) states: “Tourette Syndrome causes people to have ‘tics.’ Tics are sudden twitches, movements or sounds that people do repeatedly.” The CDC estimates that one of every 360 (0.3 percent) of children ages 6-17 in the United States have been diagnosed with Tourette Syndrome.

Beres dispelled some of the frequent myths and misconceptions associated with Tourette’s. Swearing, for example, is a tic that only a small percentage of those with Tourette’s exhibit. Additionally, Beres notes that in order to be diagnosed with Tourette’s, one must demonstrate both motor and vocal tics over the course of at least one year. Tourette’s, as with many disorders, ranges in levels of severity and complexity. Some people with Tourette’s may not be able to complete regular tasks; others may require wheelchairs. What is most frustrating, Beres says, is that there is no test or clear path for treatment for those with Tourette’s.

“Tourette’s disorder is one of many lesser-known disorders,” she says. “Every Tourette’s case/person is different and cannot be used as a baseline for the disorder as a whole. We probably don’t think your Tourette’s joke is funny.”

She does, however, frequently encourage people to laugh at her tics. When Beres’ tics first began manifesting, her family was unsure of what was happening. Her body did odd things without her control, and that frightened her. One day, Beres’ body decided to dance; she exhibited flawless execution despite being a horrible dancer otherwise. After the performance, she and her friend, Grace, named it. From then on, the duo continued to name Beres’ tics as a way of taking control over them.

“I realized I could train others (on) how to deal with the tics by telling them how to respond,” she says. “If I teach others to laugh and teach them the way I want to be treated, it eliminates the awkwardness. It also allows me to discuss the more serious items. If I have a large tic, I am fine but don’t touch me. I start the conversation lightly and guide it. If others choose not to respond in kind, I have no control over that.”

Aside from educating others about Tourette’s, Beres strives to live her best life every day. During her time at Ripon College, she found a great love in studying religion. “There is a sense of longing in theology. Longing to prove, longing to find, longing to explain. The process was universal and beautiful.”

Beres adds that before she came to Ripon College, where she majored in religion, she did not speak unless she was spoken to first. “Ripon was a wonderful experience,” she says. “The small class sizes and personal attention allowed me to feel comfortable expressing myself.”

During her Tic Talk, Beres said that she found it freeing to realize she had no control over anything. “Before Tourette’s, I just cared too much about controlling things. I was too composed, too concerned with others. Tourette’s afforded me the freedom to focus on what I do have control of and let go of everything else. I may tic, I cannot control that. I will tic in a lovely outfit. I can control the outfit. I do not have control over my Tourette’s, but I have control over my diet, my sleep, my exercise and my medical team. So if I follow my rules, I can be at peace.” 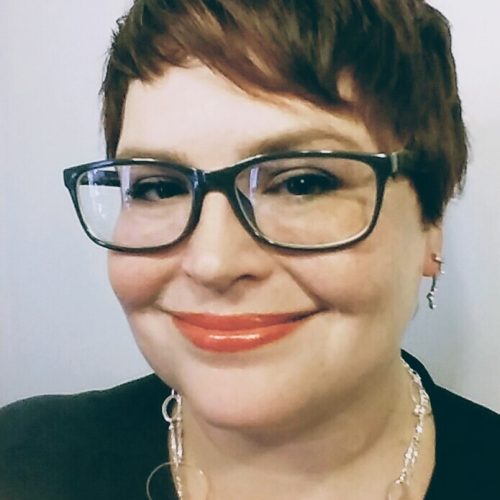