“Overall, I would call it tiring, but good,” says Mike Baumhardt ’18 of Richfield, Wisconsin. “There were some times where it felt overwhelming, but we were able to get through it.”

Baumhardt was referring to his senior research project, “Emotional Effects and Gender Differences on Perception of Ability,” which was carried out with Ceanna Caelwaerts ’18 of Suamico, Wisconsin. They researched the link between emotions and performance. While they found no significant connection between the two, their research did teach them something important.

For their project, they were interested in the “if I feel it, it must be true” fallacy, when one uses his or her emotions to gauge their beliefs and believes whatever makes them feel best. This led them to question whether positive emotions could lead to better performance on some tasks.

In order to test this, Baumhardt and Caelwaerts first had their participants recall a time they were happy, angry or having an average day. This was meant to put their participants in different emotional states before they completed a word search. Baumhardt and Caelwaerts hypothesized that those in their happy condition would lead to better performance in the word search, and that gender would also be a factor in some way.

Although their senior project was challenging, the two persisted. “I struggled the most with motivation,” Caelwaerts says. “Some days, our schedules did not line up until the late evening and it was hard to stay motivated to complete the task at hand.”

Baumhardt adds, “I would say running the stats was probably the hardest part of the project. “There were just so many different things we had to watch for and then, if we messed up anything, we had to go back and do it again. However, that made it (the) best moment because when we were finished it actually felt (like) we accomplished an almost impossible task.”

Their efforts paid off when the two presented their research at the Psychology Symposium at the end of last semester. Caelwaerts says, “I was proud of our poster and our presentation. It felt like all of our hard work paid off!”

Summing up what she learned, Caelwaerts says, “I can complete hard tasks, even when the motivation is not there. I also learned that even though research is not my favorite thing about psychology, I can do it pretty well at this point!” 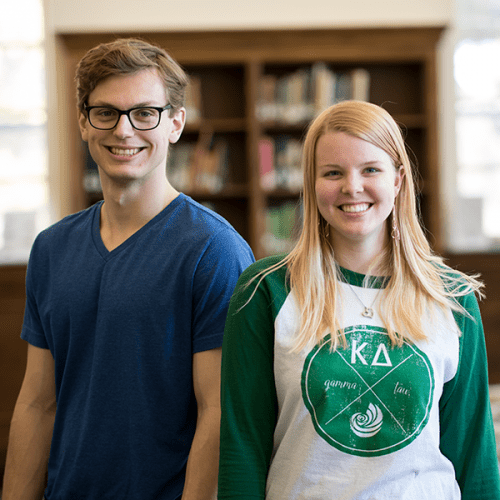