Alumna draws attention to women’s needs during times of crisis

“I’ve seen women come in wearing bras that are held up by belts, safety pins, stitches and staples,” says Rachael Heger ’03 of Indianapolis, Indiana. “When you are able to put on a new bra that fits, that feels good that’s in a style you want, it can really change your day.”

What started as a New Year’s Resolution has become full-time work for Heger, who manages the Indianapolis affiliate of I Support the Girls, a nonprofit organization that collects bras and menstrual products and distributes them to women in need. Her journey started in 2016, when Heger’s young daughter asked, ” … ‘Why do we celebrate the New Year? What do we do?’” Heger says. “I wanted to give her a reason.”

Heger recalled a story she had read about I Support the Girls founder Dana Marlowe. She reached out to Marlowe to get advice and set up a collection box. She had one goal for the year: collect 3,500 bras before her 35th birthday at the end of the year. She met that goal in only 88 days.

Since 2016, Heger has collected and distributed more than 10,000 bras. She also has started collecting and distributing menstrual products, which often are not available in food pantries or by purchasing with food stamps. “The government doesn’t think they are necessities,” Heger says, “but they’re expensive and they are necessary.”

I Support the Girls has expanded over the years with affiliates across the United States, as well as global affiliates in Thailand, Mexico, Pakistan, Canada and Australia. More than 1 million bras and menstrual products have been donated by the organization. I Support the Girls donates to homeless shelters and LGTBQA groups, as well as to refugees, victims of domestic violence and victims of sex trafficking.

I Support the Girls also donated 345,000 bras and menstrual products to survivors of Irma, Harvey and Maria this year. “Your period doesn’t stop for a hurricane,” Heger says. “We had units in Harvey 48 hours after the storm hit.”

Heger majored in history and Ripon College and studied library and information studies at Simmons College. At the start of 2016, Heger did not know her New Year’s resolution would change her life, nor the lives of other women. Heger and I Support the Girls offer women something more than a bra — they offer them dignity, Heger says.

“It’s really important, a good fitting bra is really necessary,” Heger said. “It makes your clothes fit differently, you stand up straighter, it gives you confidence.” 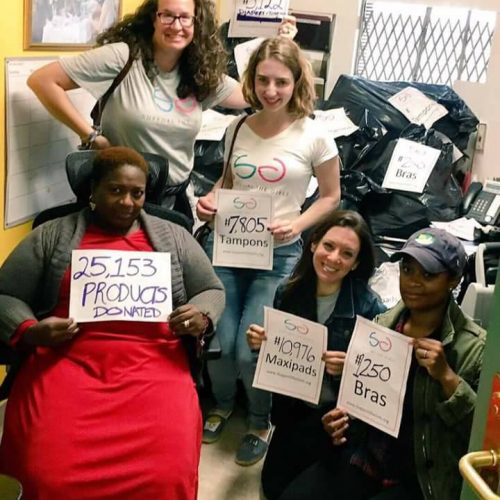