At the 152nd Commencement ceremony at Ripon College Sunday, 171 students received their diplomas and became new graduates. With the theme of “Civil Discourse and Dialogue,” the ceremony honored three special guests.

They all spoke at the Senior Brunch and Forum Sunday morning and at the Commencement ceremony in the afternoon.

President Zach Messitte urged the new graduates to share their service, wisdom and talent with the world, and to “create space for crucial conversations” to address the needs of “Civil Discourse and Dialogue.”

Ballweg spoke of the importance of compromise in bridging the gaps between differences of opinion. “Even things that look simple are sometimes very complicated,” she said. “There are decisions that are made that will have you biting your lip sometimes. (But this sometimes is necessary) “to move down the track of getting something accomplished.”

In accepting her honorary degree, she spoke about her family’s longtime involvement with the College, even before she started her service in public office. Her children, as high school students, took part in advanced college experience opportunities offered by the College, and she noted the many opportunities offered to the local area by the College. Ripon College is “a unique and wonderful part of the 41st district for my community and my family,” she said.

Zimman said common ground among differing factions can be found by establishing a basic set of facts on which they can all agree and examining the pros and cons from each side on the various issues. “If we can build that foundation, we can begin the discussion,” he said. We need to “understand the difference between facts and opinions. We should have respect and be open to hearing about things.”

He said it is important to work to improve schools in order to provide a better education for students and their families. “Education is the pathway to opportunities,” he said. “I can only hope I gave as much to those around me as I received from them. People notice when you aim for something greater than yourself. Find your own way to make the world a better place. You can make a positive difference for others.”

Woodruff addressed three main issues. She said that after the Commencement celebration, the graduates now will have the responsibility to give back to society. And they need to bear in mind the need for civil discourse and the importance of truth.

She said she had spoken with several Ripon College seniors since her arrival on campus, and every one of them had spoken about a particular professor or staff member who had made a big difference in their lives. They noted “the closeness of this community and the chance to grow,” Woodruff said. “Ripon came through clearly as a special place. Civil discourse is not just an ideal, it’s something you live here.

“Take the good lessons you learned here and commit to yourself that you will live those values in your own lives. Find opportunities in your life to give a hand to others who have not had the opportunities you had.”

She said that although the country has made great progress in expanding opportunities and equality for all, there still are many inequalities across racial, gender and economic lines. “You have a responsibility to speak up if you think someone is being disrespected,” Woodruff said.

She said there currently is a great political divide in our country. “In this environment, there is an urgent need for civil discourse,” she said. “Try to understand the other person’s point of view.”

She said even though people may have very different points of view about a subject, discussion need not be mean-spirited or lacking in civility. “You have to agree to disagree,” she said, “or you can’t get to any kind of compromise. Hold your strong beliefs and principles, but recognize that others have a different set of views. … As a society, we have to have agreed-upon rules, and we’ve got to find some common ground. We need to do a better job of listening to each other.”

She said that civil discourse “is the lifeblood of a free society.” She said some prominent politicians haven’t always been honest, and this imperils our democratic society. Judges have been accused of bias, the science of climate change has been challenged and journalists have been accused of providing “fake news.”

“We, as journalists, have a responsibility to be careful,” she said. “Sometimes our reporting has been better. But every journalist I know loves this country as much as any politicians elected to public office.”

She told the graduates not to be afraid to fail. She has had a wonderful career in journalism, but faced several major setbacks. “I almost threw in the towel, but I hung in there,” she said. “There is no shame in failing. No matter what disappointments you suffer, be disappointed for a moment but keep going. Try again and again.”

Steve Bellin-Oka, Ripon College’s first poet-in-residence, will be one of the readers at Saturday’s Wisconsin’s Own Library Open House held at Ripon. All are welcome […]

Wisconsin’s Own Library Open House will be held from 1-3 p.m. Saturday, Nov. 13, at Ripon College. The event is sponsored by the General Federation […] 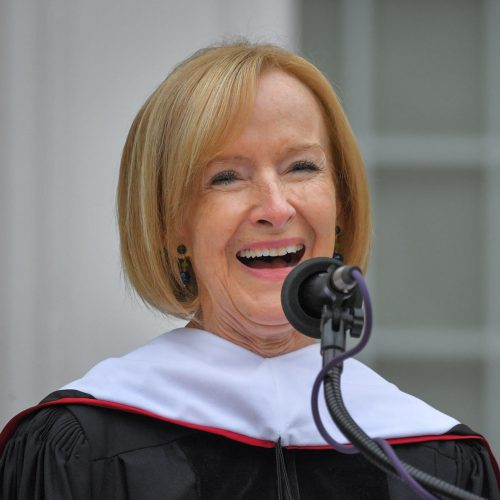