Michael ’77 and Suzanne ’75 Poulos: Combining the legal and musical worlds

“If you look at the history of music, many of the great composers actually have a background in the law,” says Michael Poulos ’77 of Evanston, Illinois. Michael and Suzanne Poulos ’75 work together at Poulos Black PC in Evanston. They also are founding members of, and musicians in, the Chicago Bar Association Symphony Orchestra.

“I can’t imagine life without music; it’s everything,” Suzanne Poulos says. “It’s so creative, it expresses so much for everybody in one way or another.”

Music has always been a shared passion for the couple. At Ripon, Suzanne served as Michael’s accompanist when he performed for music juries.

After Ripon, the couple continued to engage with the world around them. Michael ran for office in 1984 and, together, the couple hosted “The World” on Radio Earth, an international radio broadcast that discussed news in an objective and informative way.

The couple also started their law practice together. Michael works as an attorney, and Susanne runs the office. “Every draft has been read and proofread by me, and all the clients talk to me,” she says. “That’s how we have a good collegiality: they trust us, they feel better about their issues when they can talk to either one of us.”

Thirty-two years ago, the Poulos’ helped found the Chicago Bar Association Symphony Orchestra. The orchestra, comprising legal professionals in the area, has been recognized by other bar associations around the world. Michael is the assistant conductor and principal trumpet in the orchestra. Suzanne plays celeste and piano and is also the soprano section leader.

The orchestra allows lawyers to express their musical talent and also helps them to work together. “We’re supposed to be opponents in the courtroom but colleagues in the real world, and the music has helped us do that,” Michael says.

Music also can connect to social issues, Suzanne believes. Currently, she is planning a concert for the orchestra that features music of female composers. The concert will commemorate the 19th amendment, which granted women the right to vote, and celebrate the work of female composers.

In 2012, Michael received Ripon’s Distinguished Alumni Citation, honoring the accomplishments of both himself and Suzanne. The two strongly believe their education has enriched their lives.

“You can see the Ripon influence,” Michael says. “Your life is not just one thing. There’s a lot of dimensions to it. We’ve taken law and turned it into music. In doing so, not only have we had many amazing relationships, but it’s given our lives an entirely extra dimension, as well as the lives of so many lawyers.” 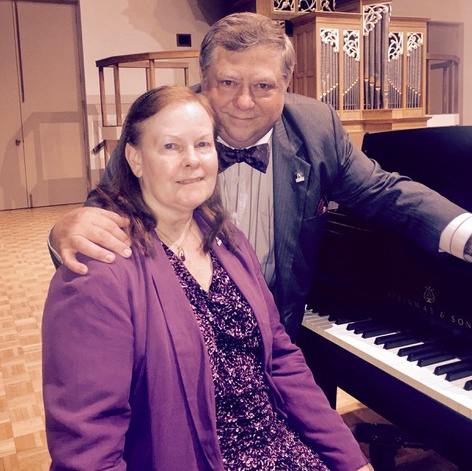