The universe gets measured in “Silent Sky,” a play written by America’s most-produced playwright Laurie Gunderson, that will open Ripon College’s 2018-19 theatre season Oct. 10-13. All shows will begin at 7:30 p.m.

The story is based on an actual 20th century astronomer, Henrietta Leavitt, who leaves her rural home and her loving and supportive sister to become a “computer” at the Harvard Observatory. Her job entailed charting the stars for renowned male astronomers to further explore. Her work and status are similar to the work and status of the women employed in the movie Hidden Figures: low recognition, low pay and tedious work.

The play spans those two decades of her work and life as she leaves her rural home in Wisconsin and settles in with her colleagues, also based on true historical figures.

The play is “lovely,” says Professor of Theatre Robert Amsden, the play’s director. “In the past couple of years since it was published, it has been one of the most often-produced scripts in the country.” Critics have described it has “heavenly,” [l]ively, funny, accessible … alive with interesting ideas” and “sheer magic … with bursts of smart infectious humor.”

Amsden said he was drawn to the play because of interesting construction, pleasant humor and compelling story which he says is “spreading the good word about the most important astronomer of the 20th century that you have never heard of.” Edwin Hubble (famous for the orbiting telescope named after him) based his renowned work on Leavitt’s discovery about how to measure distances in space.

Tickets for the show are free, but reservations are recommended for the theatre-in-the-round setup as there are fewer seats available than usual.  Call 920-748-8791 or email [email protected]. The content is appropriate for all ages. 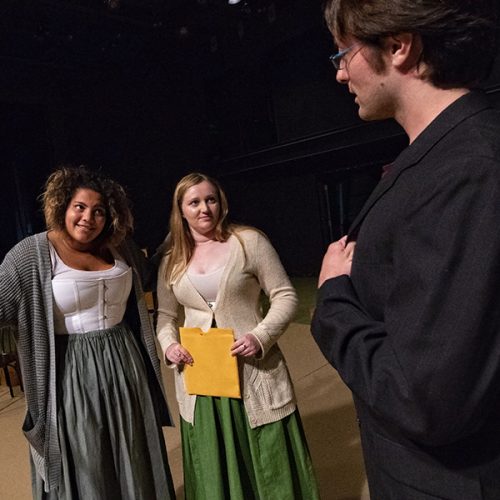