For the past 30 years, Mary Jane Bumby ’52 of Green Lake, Wisconsin, has continuously applied the knowledge gained from her biology studies at Ripon College to her work as a volunteer for Wisconsin’s Citizen Lake Monitoring Network, monitoring the water quality of Green Lake.

The network is the core of the Wisconsin Lakes Partnership and creates a bond between more than 1,000 citizen volunteers statewide and the Wisconsin Department of Natural Resources. Their goals are “to collect high-quality data, to educate and empower volunteers, and to share this data and knowledge,” she says.

Among other tasks, she performs routine measurement of the lake’s transparency and dissolved oxygen.

From early childhood, Bumby knew she wanted to attend Ripon College. Her parents, Harold Bumby and Isabella Bumby, met at Ripon College, and, because she was their daughter and a resident of Ripon, she frequently saw College activities. For 40 summers, her family visited nearby Green Lake.

Before retiring, Bumby taught biology in high schools across the state and obtained a master’s degree in botany-zoology from the University of Wisconsin-Milwaukee in 1972. Her master’s thesis compared the lake’s aquatic plant community to the same measurement 50 years earlier.

She also has served as the director of the Green Lake Sanitary District and in the Green Lake Association Board, working toward bettering the environment around her.

She says that Ripon College laid the foundation necessary for her research on Green Lake’s weeds (macrophytes). She was granted a key to Farr Hall, which allowed her to place freshly collected and sorted quadrate-collected fresh macrophytes as well as filamentous algae into plant-drying ovens during odd hours of the night.

Bumby also utilized the College’s scales in the chemistry lab to gather data regarding dry weights for all species collected from the lake.

Bumby’s volunteer work has led to a five-decades long participation in Green Lake’s survey of its macrophytes, contributing to the 1981, 1991, 2001 and 2011 surveys. She plans to participate in the 2021 survey, as well, when she will be 90 years old. 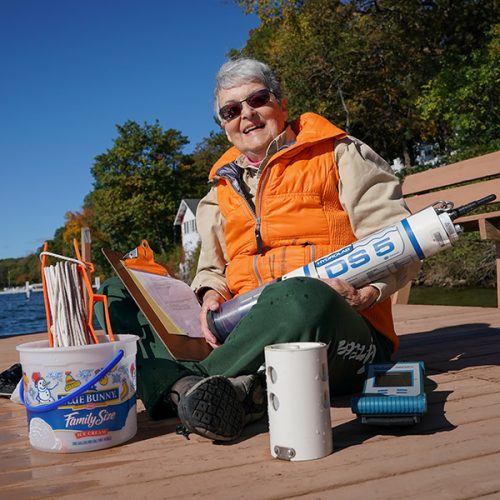