A Ripon College education “unlocked his potential,” according to Fred Kiekhaefer ’69 of Castle Rock, Colorado.

At Ripon, Kiekhaefer discovered his affinity for physics and ability to pursue engineering. “Physics tested whether I had the capacity (for engineering),” he explains. “First-year chemistry/physics was a brain crusher. … I failed at first, but ultimately learned to think and problem-solve.”

He notes that former professor of physics Dino Zei and former professor of chemistry Earle Scott provided Kiekhaefer with personal attention, straightening him out after a difficult first semester dedicated to adjusting to the rigors of college. “Ripon professors taught me to think and learn how to satisfy different demands,” he says. “Physics at Ripon prepared me for engineering education. I am forever grateful.”

After graduating from Ripon, Kiekhaefer earned an MBA from Northwestern University and a master’s degree in engineering from the University of Wisconsin-Madison.

For 22 years, he served as president of Mercury Racing, a company “known worldwide for its leadership in powerboat racing and production of high performance consumer and race marine products,” he says.

Now, he is developing a marine drive system (MDS) which aids aquatic vehicles in moving and propeling through water. The MDS, which is intended for an underserved segment of the marine market, has been dubbed Project Dolphin.

“I’ve done all these things at some time before, but not all at once — and not from scratch,” he says.

Project Dolphin proposes a boldly new drive concept, which has resulted in a few “dead ends, do-overs and even failures common with invention,” Kiekhaefer says. On-water testing of his first prototype in February and March 2018 revealed design shortcomings, highlighting components that he has since redesigned.

He can’t wait to get back on the water, continuing the progress of Project Dolphin’s development. His ideal plan is to sell the concept of Project Dolphin to a strategic buyer and assist them with serial production and initial sales.

Kiekhaefer says his time at Ripon helped him to mature and prepared him for an education and career in engineering and in business. “In combination with early career choices, I became a successful entrepreneur in the recreational marine field. That, in turn, led to acquisition by Mercury,” he notes.

“After 22 years managing Mercury Racing, I decided to design a propulsion system for an underserved segment of the marine market. Ripon education was a fundamental building block of both my education and my character,” he says. 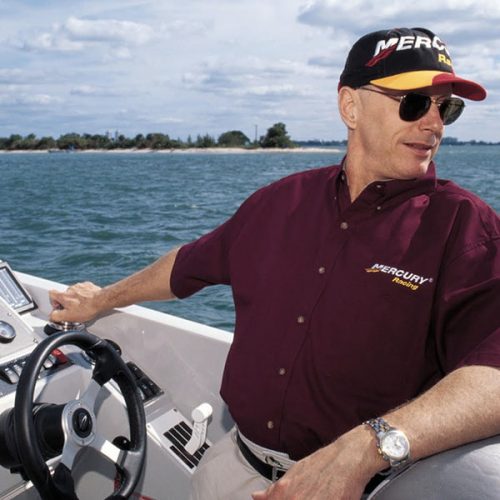