President Messitte to appear on C-SPAN to discuss book

President Zach Messitte and his co-author Charles Holdon will appear on C-SPAN3’s “American History TV” program to talk about their book Republican Populist: Sprio Agnew and the Origins of Donald Trump’s America. The first airing will be Saturday, Nov. 23, at 7:55 p.m. CST.

Written by Messitte; Holdon, professor of history at St. Mary’s College in Maryland; and Jerald Podair, professor of history and Robert S. French Professor of American Studies at Lawrence University in Appleton, Wisconsin, Republican Populist was released Oct. 11. It addresses the effect former Vice President Spiro T. Agnew had on the modern Republican Party and claims that it is impossible to explain the internal issues that the Republican Party is dealing with today without an understanding of Spiro T. Agnew and his beliefs.

Typically a maligned figure in American political history, Agnew often is overlooked. Although he is largely remembered for his alliterative speeches, attacks on the media and East Coast intellectuals, and for his resignation from office in 1973 in the wake of tax evasion charges, Agnew had a significant impact on the modern Republican Party.

He was one of the first proponents of what would become the ideology of Donald Trump’s GOP. He also helped to create much of the rhetoric that established the Republican Party as a strong force that defines America’s current politics. The book analyzes Agnew’s populist beliefs and his attempts to make the Republican Party represent the silent majority and examines the connection from Agnew’s version of the party to the current Republican Party with populists and businessmen. 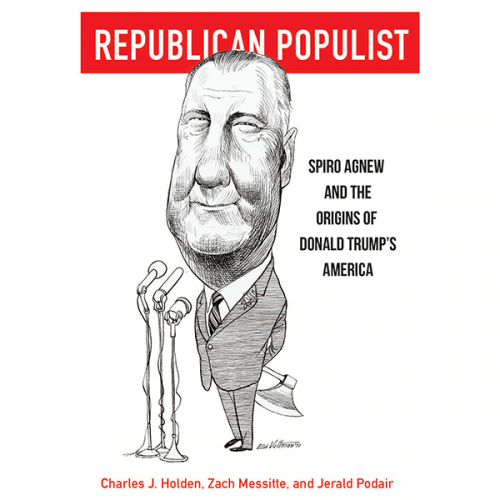