Dave Shogren ’84 takes his Ripon experience to the world stage

Before he even toured Ripon College, Dave Shogren ’84 already had decided that he wanted to attend a small liberal arts college in Wisconsin.

He grew up in Sturgeon Bay, Wisconsin. During his campus tour at Ripon, he felt like he belonged here largely because everyone seemed so warm and friendly. He majored in English, minored in art and took several foundational business classes.

The most rewarding part of his Ripon experience, he says, was serving as editor-in-chief of the College Days newspaper for nearly two years. He enjoyed that it allowed him to be a boss, build and manage a staff, and produce a finished product regularly as well as giving him experience with writing, designing and developing content — skills he continues to use every day.

After earning his master’s of business administration degree from the Olin School at Washington University, Shogren now is the president of U.S. International Foods LLC in St. Louis, Missouri, which exports food and grocery products made in the United States to supermarkets and distributors in Asia. He is involved in sourcing new products and suppliers, marketing, sales, logistics, creating supply chains, running social media, accounting and finance.

He spends about three months each year visiting customers and attending trade shows in Asia. To facilitate these trips, he learned Mandarin Chinese.

Earlier this year, he was appointed to a two-year term on the Trade Finance Advisory Council, the principal advisory body to the U.S. Secretary of Commerce Wilbur Ross on matters relating to access to trade finance for U.S. exporters.

Shogren’s biggest takeaways from Ripon College are developing his communication skills, acquiring an open mind, becoming a creative thinker and learning how to look at situations from multiple points of view. His liberal arts background has helped him in his travels when he has to communicate with people who do not speak English as their first language, and when he needs to find commonalities between his experience and their business.

(Photo: Dave Shogren, third from left, meets with other members of the Trade Finance Advisory Council.) 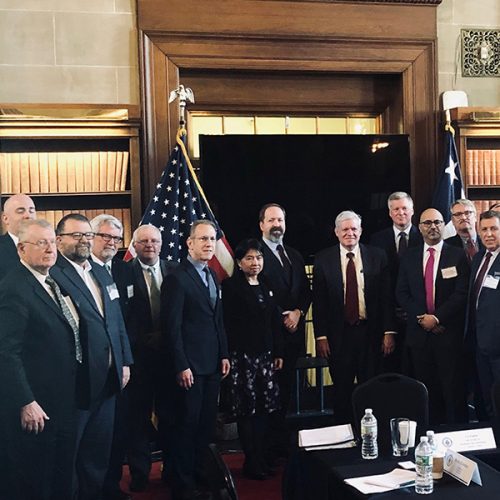