William Shakespeare’s play “The Comedy of Errors” will be performed March 4 through 7 by the Ripon College Department of Theatre. Performances will begin at 7:30 p.m. in Benstead Theatre, C.J. Rodman Center for the Arts. Admission is free, but reservations are recommended by calling 920-748-8791 or sending an email to [email protected]

“The Comedy of Errors” is a madcap romp involving two sets of twins, two a merchant’s sons and two brought up as servants. After a shipwreck, the twins were separated with one of each pair coming to the city of Syracuse and the other pair floating away to parts unknown.

The brothers are searching for each other and the father is searching for all of them. The father has only one day to complete his quest or be put to death for crossing the border into the city of Ephesus for his search.

The play continues in a series of mistaken identities and errors building to fights, imprisonment and even an exorcism.

Director Ken Hill says the play is a very early Shakespearean play based on a well-known play by the ancient Roman playwright Plautus. “Shakespeare never met a plot he couldn’t steal and improve,” Hill says. “Where his later plays sprawl across locations and cover long periods of time, ‘The Comedy of Errors’ is a compact classical farce set in one location with all the action happening in one day, much as Plautus’ play was structured.”

This production is entered into the Kennedy Center American College Theater Festival (KCACTF). This program identifies and promotes quality in college-level theater productions. KCACTF also awards scholarships, internships, grants and awards for the actors, directors, playwrights and other personnel involved. 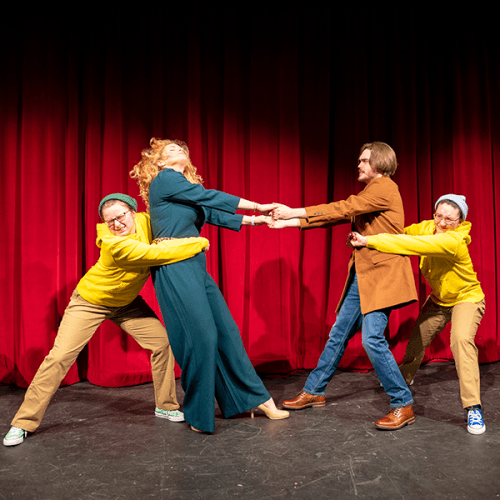