The response needs of the COVID-19 pandemic have prompted Jamie Hawley ’88 to shift production of his one-man business from creating fishing tackle bags to creating mask kits to protect against the virus.

The south shore of Massachusetts, where Hawley lives with his wife, Kristen Diemer Hawley ’88, was hit early and hard by COVID-19, Hawley says. Several weeks ago, his daughter, Rachel Hawley ’19, told her parents the healthcare workers at the hospital she works at in Madison, Wisconsin, were told they needed to prepare to sew their own protective masks. It was foreseen that there would be a shortage of personal protective equipment (PPE) because of the pandemic.

“I understood then that the need for PPE for healthcare workers was going to become critical,” Hawley says.

Hawley had recently purchased a new fabric cutting machine for Flatlander Surfcasting, the company he founded in 2013, and he knew that it would have the capacity to cut thousands of masks. But it was still unassembled and in shipping crates in his shop. While a company team normally comes onsite to set up the machine and provide training, they were now unable to travel from their Oklahoma business site. Instead, they assisted Hawley remotely in setting up his own machinery.

“I have good mechanical instincts so the setup was not much trouble at all,” Hawley says. “Learning the process of creating patterns in a CAD program called for some long days and late nights, though.”

He followed a mask pattern provided by a hat business that switched to making masks. “I modified their pattern to align with CDC guidelines and to make the kits user-friendly for people who would be sewing at home,” he says.

He emphasizes that his mask kits are not FDA approved or suitable for healthcare workers on the front lines who require the N95 masks. “The masks are not as protective as a surgical mask but are better than using a scarf or bandanna that the CDC now recommends,” he says.

This week, Hawley began cutting the fabric for the mask kits and the elastic is scheduled to arrive later this week. Kits of 25-50 masks will include sewing instructions for volunteer sewers across the county. Finished masks will be provided free of charge to individuals and non-healthcare workers who are still on the front lines — such as firefighters, grocery store workers and postal carriers.

Hawley says he won’t be charging for the kits or for postage, and many people, including Ripon College alumni, have made donations to help offset some of the material and shipping costs. 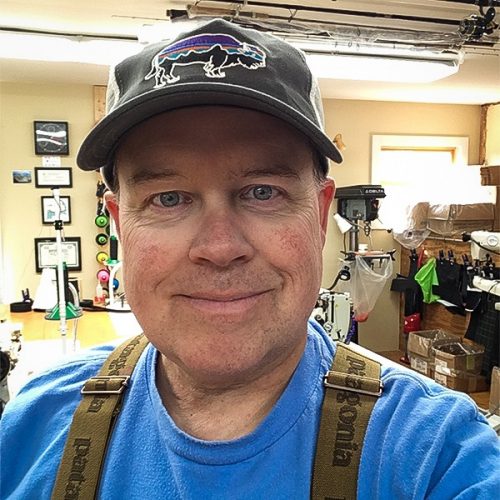